Kmiec on Korzen, Kelly and Chaput – A Matter of Priorities

“Catholic Answers: Two books for voters who take their faith seriously”– Doug Kmiec, who has lately become something of a poster-boy and spokesman for ‘Catholics for Obama’, reviews Archbishop Chaput’s Render unto Caesar: Serving the Nation by Living Our Catholic Beliefs in Political Life (Doubleday, 2008) and A Nation for All How the Catholic Vision of the Common Good Can Save America from the Politics of Division , by Chris Korzen and Alexia Kelley.

As to be expected, Kmiec finds a sympathetic ear in Korzen & Kelley, given their assertion that Catholics have become ‘preoccupied’ with abortion to the subordination of peace, the environment and welfare:

END_OF_DOCUMENT_TOKEN_TO_BE_REPLACED

When Sara and I were working through our marriage preparation last fall, Fr. Gallinger warned all of us that we should make sure to have the marriage license ready before the ceremony. After all, there’s nothing like reaching Saturday and finding out that the courthouses are closed. I assume this is a general cautionary for people getting married elsewhere, for he continued in a humorous vein: “Of course, in Wyoming, if you can’t get into the courthouse, you know someone who knows someone who has the keys to let you in.”

END_OF_DOCUMENT_TOKEN_TO_BE_REPLACED

Preferential Option for the Middle Class?

In discussion with my more politically progressive Catholic brethren, I’ve had it put to me that the American political party which receives by preference has at its heart a “preferential option for the rich.” Supporting a Democrat such as Obama may mean compromising on the abortion issue (while hoping that the economic miracle that will spontaneously occur when a Democratic posterior inhabits the chair in the oval office may in fact do a better job of “decreasing the incidence of abortion” than actual restrictions) but at least we can be sure that there will be an end to senseless war mongering, a “preferential option for the poor”, health care for all, an end to the cruelty of capital punishment, restriction of those murderous pieces of inanimate metal called “guns”, etc.

This long list provides the “proportionate reasons” to vote for the most pro-abortion presidential candidate in history, not merely with a sense of reluctant necessity, but with a moral righteousness that scorns all others.

END_OF_DOCUMENT_TOKEN_TO_BE_REPLACED

Lincoln and Liberty Too

I live in the Land of Lincoln.  I sometimes joke that we call ourselves that because Lincoln was the only honest politician ever to come from Illinois.  Each summer the family and I go down to Springfield.  We see the Lincoln museum and go over to the Lincoln tomb.  We say a few prayers for the soul of the Great Emancipator.  “It is all together fitting and proper that we do” that, but why do we do it?

END_OF_DOCUMENT_TOKEN_TO_BE_REPLACED 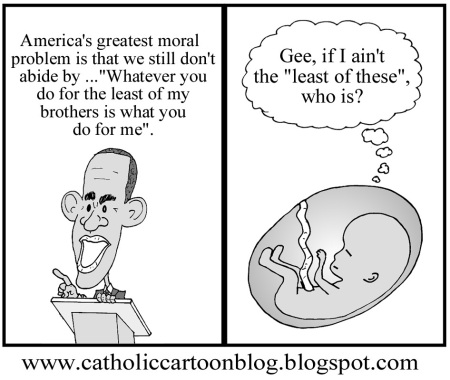 Senator Obama claims that he is a Christian.  Yet when citing the Golden Rule it applies to non-mistakes nor punishments: