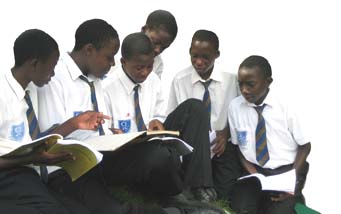 At one of the blogs I read regularly, Neo-Neocon, the proprietress has an excellent story highlighting the praise of Mathew Parris, a British atheist and writer, for the work of missionaries in Africa and the enormous positive spiritual changes which frequently occur in their converts.  I have long thought that the good work performed by missionaries around the globe, but especially in Africa, was the major overlooked story of the last century.  If I had to pick one development of the past century that will still be having a major impact a millennium hence, I would pick the fact that Africa is becoming a Christian continent.  As much of Europe is forgetting the Faith, and too many Americans are cold and indifferent, the message of Christ is meeting with cries of joy throughout Africa.  Perhaps some day Christian missionaries from Africa will light the fire of faith again in “darkest” Europe.

This entry was posted on Tuesday, December 30th, 2008 at 5:27am and is filed under Uncategorized. You can follow any responses to this entry through the RSS 2.0 feed. Both comments and pings are currently closed.