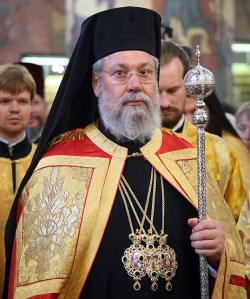 First we have Pope Benedict XVI having the excommunications on the Society of St. Pius X (S.S.P.X.)  lifted on January 21.  Then we have rumors that the Congregation of the Doctrine of the Faith (C.D.F.) possibly offering the  Traditional Anglican Communion (T.A.C.) entry into the Catholic Church on January 29.  So there needs to be a third piece of good news percolating somewhere some would think?

END_OF_DOCUMENT_TOKEN_TO_BE_REPLACED

Something for the weekend.  A followup to my earlier tribute to Linoln, and part of my series of posts on Lincoln leading up to his 200th birthday on February 12, 2009.  This video purports to have in it every known photograph of Mr.  Lincoln.  The songs in the video are Lincoln and Liberty Too, perhaps the most stirring campaign song in American history, Dixie, ironically a favorite song of the President of the Union, and the haunting Ashokan Farewell.

Comments Off on Faces of Lincoln-Part II |

Now This Is An Archbishop!

Hattip to our commenter Phillip.  When Raymond Burke was Archbishop of Saint Louis he was a tireless advocate of the unborn and also tireless in taking to task those who supported abortion.  His elevation to be head of the Supreme Court of the Apostolic Signature in Rome has not diminshed his zeal for the pro-life cause.  In an interview in October of last year he stated that the Democrat party risked transforming itself into the party of death.

END_OF_DOCUMENT_TOKEN_TO_BE_REPLACED

In many ways, I am a natural Democrat. I do not have a problem, in principle, with large government or higher taxes that increase wealth distribution. I was against the War in Iraq. I favor amnesty for illegal immigrants (or at least I favored many of the plans we were assured were  ‘not amnesty,’ which looked a lot like amnesty). I favor health care reform, including higher taxes, as long as the policies in question have a strong empirical foundation. While I have concerns about taking on large amounts of debt, I do not have a principled objection to the recent stimulus package (provided it actually is a stimulus package).

But I can’t call myself a Democrat.

END_OF_DOCUMENT_TOKEN_TO_BE_REPLACED

Bearing has an interesting post up which I suspect reflects the political experience of many serious Catholics over the last twenty five years. The whole thing is worth reading, but I’m quoting it extensively because I think the point she’s making is interesting and widely applicable:

I entered full communion with the Catholic church at the Easter Vigil in 1993, when I was a freshman in college…. A couple of years after that, I had a second conversion in which I was forced to realize that I could not be simultaneously a believing Catholic and a supporter of legal abortion. (Why it took me so long is another story again. Hint: There were some serious problems in that particular RCIA program.)

END_OF_DOCUMENT_TOKEN_TO_BE_REPLACED

And They Accuse Us of Brainless Sloganisms

So there’s a new You-Tube video  spreading around meant to be the final word in exposing the hypocrisy of anti-abortion advocates. In what many seem to believe is highly telling, an interviewer asks a group of demonstrating pro-lifers that, should abortion be declared illegal, if they would punish women who had abortions. Apparently the confused looks, murmured “I don’t know, I don’t think they should be punished,” and the otherwise general indication that they hadn’t thought much on the issue, somehow shows that pro-lifers do not believe that abortion is murder, or even the taking of human life. There is a huge amount of self-congratulatory straining of shoulders, clapping themselves on the back for having discovered this one-shot knockdown argument.

END_OF_DOCUMENT_TOKEN_TO_BE_REPLACED

Bravo to the 177 Republicans, every member of the GOP in the house, and the 11 brave Democrats, who voted against the 819 billion Bankrupt the Nation Act of 2009.  This pork laden monstrosity may well serve as an example for future historians, along with the Bailout Swindle of 2008, as the culminating acts of fiscal madness that led to the decline, at least temporarily, of the US as an economic power.  This also sends a message to the Public: ” You wanted change?  This is the change you are getting.”  This policy is now owned lock and stock by the Democrat party.  If it works, something I think unlikely in the extreme, they will be in power for a generation.  If it does not, 2010 and 2012 might be very good years for the Grand Old Party.  In either case, the public is going to be given a clear choice next time around.