Farewell (and thanks) to President George W. Bush 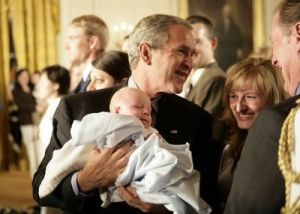 George Weigel would like to thank President Bush. “For what, you ask? For many things that ought to count for Catholics”:

I should like to praise him for his steadfast support of the pro-life cause, domestically and internationally. Thanks to President Bush, we have two more Supreme Court justices who likely know that Roe vs. Wade was terrible constitutional judging, and dozens more federal district court and appellate court judges with similar convictions. Thanks to President Bush, the U.S. government drew an important moral line in stem cell research, even as the administration accelerated bioethically sound research strategies that have produced real results. Internationally, the Bush administration stood firm against the Gadarene rush to use international law to declare abortion an international human right and a necessary component of the emancipation of women; as one senior Vatican official put it to me, a year ago, “We know we’re never going to have another American administration as supportive of our core issues as the Bush administration has been.”

I should like to praise the President for his work to rid Africa of the plagues of AIDS and malaria and to relieve the suffering of those afflicted with those awful diseases. George W. Bush may be an object of ridicule in certain U.S. zip codes; he is the subject of veneration among those in the “bottom billion” whose lives his policies have saved or enhanced.

I should like to thank the President for offering Pope Benedict XVI such a warm welcome on the South Lawn of the White House on April 15, 2008 — a welcome that ought to have put paid, once and for all, to the notion that there is something incompatible between robust Catholic faith and a mature gratitude for the political miracle of American democracy.

I should like to thank President Bush for his personal decency, manifest in his (unpublicized) personal attention to our wounded and to the families of the fallen; in his refusal to become bitter in the face of outrageous slander; and in his calm amidst tribulations that most of us can’t imagine. I should like to thank him for his unapologetic confession of Christian faith, and for his testimony to the importance that prayer plays in his life. And I should like to thank him for not giving a hoot about the mockery that such a witness draws from a secularized mass media, from American high culture, from cranks like Michael Moore, and from Euro-secularist snobs who spent eight years sneering at the evangelical cowboy in the White House while their continent was dying from spiritual boredom.

This entry was posted on Saturday, January 17th, 2009 at 3:48pm and is filed under Uncategorized. You can follow any responses to this entry through the RSS 2.0 feed. Both comments and pings are currently closed.

66 Responses to Farewell (and thanks) to President George W. Bush