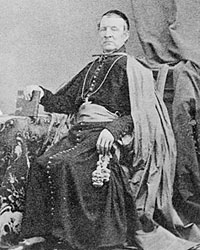 Archbishop John Hughes (1797-1864) of New York, was a titan within the Catholic Church in America in the nineteenth century.  Overseeing with skill the explosive growth of the Church in New York, and helping lead generations of Catholic immigrants out of poverty,  he also found time to take part in the public affairs of his day, and was probably the best known Catholic churchman of his time.  He was also a very tough and fearless man.  After the anti-Catholic riots in Philadelphia in 1844 he called on the mayor of New York, an anti-Catholic bigot, and informed him that if a single Catholic church were touched in New York, New York would be a second Moscow.  (The reference was to the burning of Moscow in 1812 during Napoleon’s occupation of the city.) Not a Catholic church was touched.  On another occasion when a threat was made to burn Saint Patrick’s cathedral the Archbishop had it guarded within hours by 4,000 armed Catholics.  No wonder his enemies and friends nicknamed him “Dagger John”!