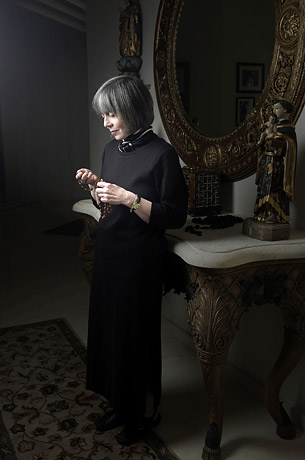 Anne Rice, author of 28 books, which have sold nearly 100 million worldwide is one of the most widely read novelists in modern history. I have read nearly every book she has published. My first inclination was to discuss the themes predominant throughout all of her writing; however, a second thought, has prompted me to focus instead rather on the book that influenced me the most – leading me to the Catholic Church for the first time as Rice herself journeyed home.

Memnoch the Devil describes the vampire Lestat’s encounter with the Devil, who calls himself “Memnoch.” He is taken on a journey through the ‘whirlwind’ into Heaven, Helll, and the main epochs in the evolution of the universe. It is a radical retelling of the entirety of biblical history from the devil’s perspective. The devil’s charge is that he is not evil; in fact, he despises it. Rather, what he opposes is God’s tolerance of the existence of evil and suffering that plagues mankind and that in the beginning God, allegedly, had no interest in inviting man into His company in heaven. Memnoch – in a long story short – becomes the servant of humanity (and God) working to usher lost souls into Heaven. He invites Lestat to join him in the fight against evil and to bring all human souls from the gloom of Sheol to the paradise of Heaven.

This is an oversimplification of the book’s plot and all that it contains. It is a wonderful book and is hard to understand out of the context of how it completes, as it were, the four books that proceed it in the series (though it is readable by itself; you’ll just miss a few points here and there).

Nevertheless, whether one loves or hate this book, I think the vast majority of people miss the point. The book is pure genius. Anne Rice – whom I have had the honor of corresponding with via email – was not trying to attack Christianity or give a preview of her own personal religious beliefs or use the Vampire Chronicles as a personal soapbox to attack God.

The point isn’t that God is evil or Memnoch is good. She isn’t attempting to shock us with her visions of Heaven and Hell, which were intriguing to say the least. Rather, the book – at least for me – offers a reminder of the role of faith in our lives. In this life, we cannot know by unaided reason alone the truths of God, creation, the fall, the devil, etc. Man has disputed over such theological questions before and after the birth of Christianity.

Lestat himself is there, he is told the “truth,” and has heaven and sheol unveiled before him. By the end of it, it’s all yanked out from under him and we’re left to wonder what was real, or if any of it was. Memnoch does not like the title “devil,” but he curiously applies to himself at various points of the novel. This further demonstrates how eager we all are to believe in something, as is the case with Lestat, even if it’s coming from the Devil’s mouth. I first read this novel as an atheist, but I almost believed in God to believe that this stuff was true; it was so compelling. We’re left wondering, moving back and forth between faith and doubt. One of the greatest lines of the book is this: it’s not all lies, not all of it, that’s the age old dilemma.

This goes back to the previous books in a way. Anne Rice explains that the whole purpose of her first novel Interview with the Vampire was to use the vampire as a metaphor to describe the human condition – the vampire represents the alien, outcast in us all. The vampire upon becoming a vampire seeks the oldest one of his kind to find out what is the meaning of what they are. Why are their vampires? What are our origins? Is there meaning or hope of redemption in this tragic condition of having to kill and do evil with the moral desire not to? It is a metaphor for the moral compromises we make everyday due to the reality of sin.

Rice herself having entered the life of an atheist was struggling with the post-WWII nihilistic modern world. She struggles with the relativism and the lack of meaning and the clash of good and evil. I think the manifest desire for some sort of salvation is compelling; it certainly grasped me. In other words, it speaks directly to our humanity. As the novels continue, we find that the origin of the vampires is more or less a catastrophic accident. No purpose, no meaning. This is clearly addressing the question of evolution without God and its implications. Surprisingly, there is little joy in knowing that your existence wasn’t intended and that it was the result of casual, arbitrary events. To some point, Lestat loses reason for existing. It seems that the truth of the story is not the interest, though the search for truth is. The greatest concern is the human experience and what is the meaning of it – why is the world so beautiful, but a “savage garden?” Why is immortality, what we Christians hope for, such a wretched gift if the state our condition does not change? That is, if we don’t leave the fallen world and enter into some new redeemed state away from the sorrow and misery that the immortal vampires cannot escape. This is why becoming a vampire, which in a theological context is like opposite of becoming a Christian — the vampires enter death, but for them, there is no new life; hence, it is called the “dark gift.” Vampires are angels going in the opposite direction into self-hatred, despair, and loneliness and not faith, hope, and love. The struggle to come to grips with Catholic theology, on a human level, in terms of experience is manifest with the story of the vampires’ origin imaging so much from Christianity, with the obsession with the body and blood, with the evil in the world, but it’s undeniable beauty (sacramental reality), etc.

What makes this series different from Twilight – don’t ever read it – is that it invites the reader to ask those fundamental questions of human existence: Who am I? Where am I going? What is the meaning and purpose of the human condition? Why is there suffering and evil?

These questions are heavily pushed to the forefront in Memnoch the Devil and its lasting impression on me still lingers: Wait a second, this is a novel, this is Anne Rice. This isn’t the truth. Memnoch doesn’t exist! It’s just fiction…

I believe that the genius of the book, both in the spirit of her intentions and the eternal providence of God. I remember my first real “encounter” with the devil – which, I didn’t believe that there was such a being – was that whoever he was, he tricked me, he tricked us all. That’s the genius, the emotion that it stirs, not the alleged religious truth that Memnoch proclaims.

This entry was posted on Monday, March 9th, 2009 at 11:35pm and is filed under Uncategorized. You can follow any responses to this entry through the RSS 2.0 feed. Both comments and pings are currently closed.