The California Supreme Court today upheld the gay marriage ban constitutional amendment, proposition 8.  Gays married before the ban stay married, but no more gay marriage in California.  What this means is that while California is undergoing an economic crisis, it will also be going through a political war waged between supporters and opponents of gay marriage.  This war will pit four constituencies of the Democrat party against each other:   Most Feminists and Gays against most Hispanics and Blacks.  Things will be interesting in the Golden State for the foreseeable future!  More details as they become available.

Update I:  Hattip to Ed Morrissey at Hot Air.  The vote to uphold the constitutionality of the ban was 6-1.

Update II:  The text of the decision is here.

Update III:  A good look at Catholic teaching and the family is contained in the document The Family and Human Procreation and released by the Pontifical Council for the Family in 2006 and available here. 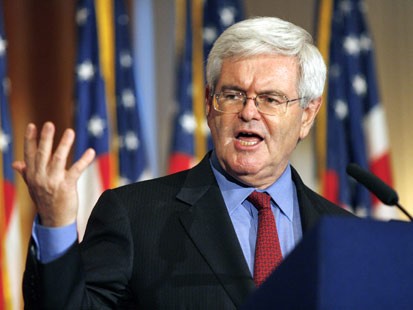 Dan Gilgoff of U.S. News & World Report had an interesting exchange with recent Catholic convert Newt Gingrich.  The  former House speaker who converted last March was on his way to Europe working on a documentary* on Pope John Paul II’s 1979 trip to Poland where Mr. Gilgoff asked if “he expected this trip to be different from previous visits”:

I don’t know that it’s much different. That’s part of what led to my conversion is the first time we [he and Callista**] went to St. Peter’s together. It’s St. Peter’s. I mean, you stand there and you think, this is where St. Peter was crucified. This is where Paul preached. You think to yourself, two thousand years ago the apostles set out to create a worldwide movement by witnessing to the historic truth they had experienced. And there it is. The last time we were there we were allowed to walk in the papal gardens and you get this sense that is almost mystical.

END_OF_DOCUMENT_TOKEN_TO_BE_REPLACED

Hattip to the ever reticent lads and lasses at Lair of the Catholic Cavemen.  The original V series was a fun, if ludicrous, science fiction invasion of earth tale which ran from 84-85.   We were expected to believe that Lizard-like aliens could be made up to look like humans.  After it was discovered what they really looked like, and that they planned to make Lizard happy meals out of humanity, they continued, for no discernable reason other than the wardrobe budget, to disguise themselves as human.  With the mind parked in neutral it was a lot of fun, especially observing the battles between Lizard-uber vixens, Diana, portrayed by Jane Badler, and Lydia, portrayed by June Chadwick, to see who would be Queen Lizard.   Dallas meets the “To Serve Man” episode from the Twilight Zone.  One of the more off-beat TV offerings in the 80’s.