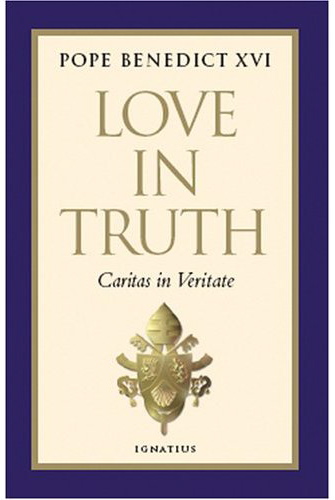 [Updates at the bottom of this posting.]

The much anticipated new encyclical that Pope Benedict XVI recently signed, his third, on June 29th titled Caritas in Veritate, or Charity in Truth, will be released soon by Ignatius Press (the English version) on July  6th or 7th of 2009 A.D.  In searching for information regarding this encyclical I found bits and pieces here and there but nothing exhaustive or concise that came close to satisfying my curiosity.  So I’ve gathered all of my information and have presented it the best way possible in this posting.  With tongue in cheek I labeled this preview of Caritas in Veritate as an ‘Exclusive Sneak Peek’*.

Caritas in Veritate will be a social encyclical examining some of the social changes that have occurred since Pope Paul VI’s encyclical Populorum Progressio, particularly globalization.  The encyclical will have Pope Benedict XVI articulating the need to bolster humanism that brings together the social and economic development of humans and to reduce the disproportionate gap between poor and rich.  One other major theme of this encyclical will be that of global justice.

Finally, according to Sandro Magister, “many minds and many hands have worked on Caritas in Veritate.”  So unlike his previous two encyclicals, Benedict had many people contribute to this particular encyclical.

To offer the insight of Pope Benedict XVI himself we can look at his numerous statements that he has given in the past.  For example it has been speculated that Benedict’s message on January 1, 2009 entitled Fighting Poverty To Build Peace, with a heavy emphasis on economics, was a foretaste of Caritas in Veritate.  The major themes of that message are as follows:

Given that this encyclical will touch on economics I can only find one piece that His Holiness has spoken about on this topic in a symposium the Pope gave in 1985 entitled Market Economy and Ethics.  Ironically in that symposium then Cardinal Ratzinger said that an economy without any ethical or religious foundation is destined for collapse.  Quite appropriate considering the recession that the United States is experiencing right now.

Some portions of the social encyclical were accidentally released about a month ago by Ignatius Press.  The following was what I was able to recover (which is no longer on the Ignatius Press website):

Pope Benedict’s third encyclical, Love in Truth (Caritas in Veritate), applies the themes of his first two encyclicals -love and hope (God Is Love, Saved in Hope) – to the world’s major social issues. Drawing on moral truths open, in principle, to everyone (the natural law) as well as on the teachings of the gospel (revelation), Pope Benedict addresses Catholics and non-Catholics alike, challenging us all to recognize and then to confront the social evils of our day. The first part of the encyclical examines the dynamic teaching of Benedict’s predecessors, Pope Paul VI and Pope John Paul II. […] In the second part Benedict surveys the social issues that confront the human race today-assaults on the dignity of the human person such as the attack on human life, poverty, issues of war and peace, terrorism, globalization, and environmental concerns.

Other portions have been allegedly revealed by Gian Giudo Vecchi of the Italian newspaper Corriere della Sera.  Here is some of the original text of the encyclical that they claim:

Without truth, without trust and love for what is truthful, there is no conscience or social responsibility, and the social action falls under the control of private interests or logics of power, with destructive effect on society, even more on a society on the way to globalization, in difficult moments like the current ones,

Some of the interesting highlights Mr. Vecchi claims that will be touched upon are [emphasis mine]:

On three different occasions in front of audiences in November of 2008 Pope Benedict XVI gave several glimpses to the essential theme of his third encyclical.  One statement in particular caught my eye [emphasis mine]:

Since love of God leads to participation in the justice and generosity of God toward others, the practice of Christianity leads naturally to solidarity with one’s fellow citizens and indeed with the whole of the human family. It leads to a determination to serve the common good and to take responsibility for the weaker members of society, and it curbs the desire to amass wealth for oneself alone. Our society needs to rise above the allure of material goods and to focus instead upon values that truly promote the good of the human person.

On another occasion in a forum of clergy from the Diocese of Rome on February 26, 2009, Pope Benedict XVI responded to a query on how the Catholic Church should take action to injustice and persist in its defense of the vulnerable.  He summarized pertinent ideas from the upcoming encyclical with the following [emphasis mine]:

[W]hat is needed is the reasonable and reasoned denunciation of the errors, not with great moral statements, but rather with concrete reasons that prove to be understandable in today’s economic world. […] To realize that these great objectives of macro-science are not realized in micro-science — the macroeconomics in the microeconomics — without the conversion of hearts. If there are no just men, there is no justice either […] Justice cannot be created in the world only with good economic models, even if these are necessary. Justice is only brought about if there are just men. And there are no just men without the humble, daily endeavor of converting hearts, and of creating justice in hearts.

In light of these bits of information we can glean some of the basics in Caritas in Veritate.  We know that this encyclical is divided into four chapters.  The themes of the first two chapters have been given away.  Chapter One will reflect on the encyclicals by Pope Paul VI, Populorum Progressio and Pope John Paul II’s Veritatis Splendor and Sollicitudo Rei Socialis.  Rocco Palmo of Whispers in the Loggia claims that this encyclical is also a contemporary answer to Pope John Paul II’s Centesimus Annus.

Chapter Two surveys the social issues that confronts the human race today.  Such as the assaults on human dignity of the human person like attacks on human life, poverty, issues of war and peace, terrorism, globalization, and environmental issues.

The final two chapters I was unable to gather any information on.  Chapter Three may well deal with possible solutions to the many issues outlined in the previous chapter and Chapter Four would be the conclusion summarizing the previous three chapters.

The following is a synopsis of the many thoughts, reactions, and opinions from around the world that have surfaced:

1. Sandro Magister has written an excellent article on the influence Pope Benedict XVI formation by the German economist Ernst-Wolfgang Böckenförde that in recent weeks has asked the Pope to come out strongly against Capitalism.

2. Michael Novak on First Things offered his defense of Capitalism in anticipation of possibly some triumphalism from liberals entitled Economic Heresies of the Left:

3. John Allen believes that Pope Benedict XVI may revisit his ‘dictatorship of relativism’ speech in this encyclical.

4. Carl Olson of Ignatius Press suggests we read Compendium of the Social Doctrine of the Church to prepare ourselves for the release of the encyclical.

5. Carl Olson of Ignatius Press also has another fine piece that recommends an article by Communio entitled Fundamental Politics: What We Must Learn From the Social Thought of Benedict XVI, by Thomas Rourke.  A highlight from that piece is as follows:

[A] central feature of the pope’s fundamental politics is to show how the state’s openness to God, far from leading to theocracy, is actually the only thing that enables the state to distinguish itself properly from the Church, and thus to resist the twin temptations of utopianism and totalitarianism.

6. John Hooper of the London Guardian seems pessimistic of Corriere della Sera’s claims by Gian Giudo Vecchi of a new world order being demanded by His Holiness [As do I].

7. John Allen prognosticates that the major themes of Caritas in Veritate will be the following [I hope and pray that Mr. Allen’s prognosis is correct because I like these themes very much]:

8. Hugh O’Shaugnessy of the London Guardian surmises that “the encyclical is unlikely to make pleasant reading for capitalists.”

*I’d like to thank Larry Page and Sergey Brin for founding Google and to Ignatius Press for accidentally leaking out portions of Pope Benedict XVI’s upcoming encyclical, Caritas in Veritate.  All three of these sources have provided invaluable research for this posting.

This entry was posted on Wednesday, July 1st, 2009 at 11:50am and is filed under Uncategorized. You can follow any responses to this entry through the RSS 2.0 feed. Both comments and pings are currently closed.

8 Responses to Exclusive Sneak Peek of Caritas in Veritate