How to Live a Selfish Miserable Life-and Fail at It!

In preparation for a forthcoming post on the life of Catholic convert Bob Hope, I have been reviewing his work.  Eddie Foy and the Seven Little Foys (1955) is a highly interesting Bob Hope comedy/drama.  It is amusing like most Bob Hope films, but I have also found it intriguing because Hope portrays Foy at the beginning of the film as a selfish loner who wants absolutely nothing to do with a wife, let alone kids.  In the film his ambitions to lead a selfish solitary life are thwarted by love.  First, love for his wife and then, after her death, love for their numerous children.  At the end of the film we even see love of God starting to enter into Foy’s life.  His attempt to lead a life devoted to self alone ends in flat failure!

Like most Hollywood films some of the details of the actual Foy and his children are distorted, but it does not deter from the central message of the film.  Humans only have true happiness by loving others and doing good for them.  It seems a simple enough concept, and it certainly lies at the heart of Catholicism, but most of the evil in the world is a testament to how elusive many people find this core truth of human life.

I cannot leave this film without showing the clip of the legendary dance routine between Bob Hope and James Cagney, reprising his role from Yankee Doodle Dandy as James M. Cohan.  Cagney had his salary for the role donated to charity, regarding it as a tribute to Eddie Foy, who in the twenties had helped out struggling young actors.

Update:  Here is the opening of the film which details how Foy was determined to remain single, and his resounding failure in that effort! 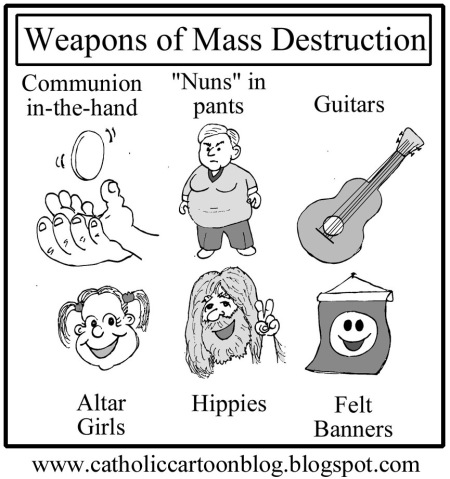 Happy 25th Sunday of the year!

Ahhh, the fruits from the spirit in the sky of Vatican II!

Give us your opinion as to what has caused the celebration of the Mass to deteriorate since the Second Ecumenical Council (using Vatican II as a starting point, but not the cause).

You can only vote once, but you can choose more than one answer (on your first and only vote), so be careful!  Voting will end on Friday, September 25, 2009 AD.

Ad Populum = The priest showing his back to God while staring at the people.  Instead of facing God with the people (Ad Orientem).

Vernacular Liturgy = The liturgy of the Mass is celebrated in only the local language of the people instead of both the vernacular and Latin language.