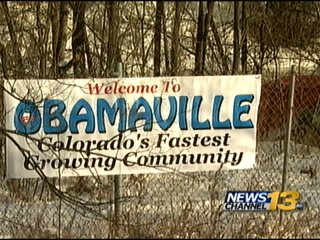 As the recession continue to take its toll on our fellow Americans, rendering more and more of them homeless, tent cities have begun sprouting up across this great country.  It would not be fair to blame President Obama for the predicament that our nation is in, but President Obama has done nothing to help the situation.

Small businesses and the private sector in general got almost zero benefit for either porkulus spending bills.  Though this recession is typical of a business cycle, there are some things that can be done to alleviate the stress the economy is undergoing and maybe expedite the expiration of the current recession.  President Obama has done neither.

So it is fitting and fair to label the tent cities that are sprouting across America as Obamavilles.

(Note: In case the above YouTube video is taken down by the Blueshirts, you can see the entire story and video here.)

President Obama cannot begin his second year as president to continue to blame his predecessor for real and imagined ills of the economy.

Eventually the American people will wise up and realize that President Obama isn’t doing much of anything at all to relieve them of their dire circumstances and see through his eloquent yet vacuous speeches.  They will understand that President Obama is no Harry “The Buck Stops Here” Truman who took responsibility to fix the problems he has on his desk, regardless of their origin, real or imagined.

If President Obama continues down this road of blame everyone else and take no ownership of issues, he’ll make Boss Tweed look like a shining example of prudent and moral leadership.

We don’t want another Tammany Hall Mister President.  I want you to succeed in elevating America from this recession.  Not take Rahm Emanuel‘s creed of taking advantage of suffering Americans by turning our country into another weak, European socialist state.

To learn more about the term porkulus, click here.

This entry was posted on Monday, December 14th, 2009 at 12:05pm and is filed under Uncategorized. You can follow any responses to this entry through the RSS 2.0 feed. Both comments and pings are currently closed.