(Updates at the bottom of this posting below)

More details have filtered in that some Iranian policemen have refused to fire on the protesters.  The hated Basiji Militia headquarters is up in flames and more reports of unconfirmed deaths from all over the country of Iran are pouring in view various media outlets. 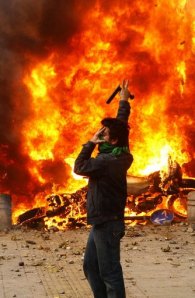 Among those killed is the nephew of Mir Hossein Moussavi, the leader of the burgeoning opposition as well as the leading vote getter in the last election which was hijacked by the clerical ruling class.  Ali Habibi Moussavi, the nephew, was shot in the chest and died at the hospital.  Details are still sketchy.

The Islamic Iranian regime has barred all journalists, but pictures and footage have confirmed large demonstrations nationwide that have not been intimidated by the use of violent force.

President Obama has failed to respond to the growing violence in Iran outside of a standard White House response from Washington of a bland condemnation of “violence”.  His hesitancy has betrayed many in the Iranian opposition to the point that if there is a regime change the opportunity to build again good relations with Iran diminishes each day as our president dawdles away in his luxurious resort home in Hawaii.

Update II: The protests have not abatted one bit since the use of violence has been authorized.  You can see a very loud and vibrant protests.  Notice how many brave Iranian women are in the crowd.

Update III: An Iranian opposition leader has finally condemned the slate of deaths on the streets of Tehran and elsewhere.  Mahdi Karroubi has called the current regime even more violent than the shah’s.  Those are fighting words indeed.

The main source of this posting is the Iran struggles to contain protests as nine are killed in clashes by Richard Spencer of London’s Daily Telegraph.  For the article click here.

This entry was posted on Monday, December 28th, 2009 at 1:53am and is filed under Uncategorized. You can follow any responses to this entry through the RSS 2.0 feed. Both comments and pings are currently closed.