Final Plea of Bishops to Defeat Senate Version of ObamaCare 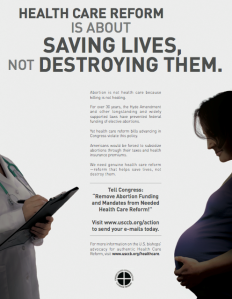 For decades, the United States Catholic bishops have supported universal health care. The Catholic Church teaches that health care is a basic human right, essential for human life and dignity. Our community of faith provides health care to millions, purchases health care for tens of thousands and addresses the failings of our health care system in our parishes, emergency rooms and shelters. This is why we as bishops continue to insist that health care reform which truly protects the life, dignity, consciences and health of all is a moral imperative and urgent national priority.

We are convinced that the Senate legislation now presented to the House of Representatives on a “take it or leave it” basis sadly fails this test and ought to be opposed. Why do we take this position, when we have a long record of support for health care reform? Our fundamental objections can be summarized in two points:

Health care reform must protect life and conscience, not threaten them. The Senate bill extends abortion coverage, allows federal funds to pay for elective abortions (for example, through a new appropriation for services at Community Health Centers that bypasses the Hyde amendment), and denies adequate conscience protection to individuals and institutions. Needed health care reform must keep in place the longstanding and widely supported federal policy that neither elective abortion nor plans which include elective abortion can be paid for with federal funds. Simply put, health care reform ought to continue to apply both parts of the Hyde amendment, no more and no less. The House adopted this policy by a large bipartisan majority, establishing the same protections that govern Medicaid, SCHIP, the Federal Employee Health Benefits Program and other federal health programs.

Despite claims to the contrary, the status quo prohibits the federal government from funding or facilitating plans that include elective abortion. The Senate bill clearly violates this prohibition by providing subsidies to purchase such plans. The House bill provided that no one has to pay for other people’s abortions, while this Senate bill does not. While the Senate provides for one plan without abortion coverage in each exchange, those who select another plan in an exchange to better meet the special needs of their families will be required to pay a separate mandatory abortion fee into a fund exclusively for abortions. This new federal requirement is a far more direct imposition on the consciences of those who do not wish to pay for the destruction of unborn human life than anything currently in federal law.

It is not those who require that the Hyde Amendment be fully applied who are obstructing reform, since this is the law of the land and the will of the American people. Rather, those who insist on expanding federal participation in abortion, require people to pay for other people’s abortions, and refuse to incorporate essential conscience protections (both within and beyond the abortion context) are threatening genuine reform. With conscience protection as with abortion funding, our goal is simply to preserve the status quo.

Universal coverage should be truly universal. People should never be denied coverage because they can’t afford it, because of where they live or work, or because of where they come from and when they got here. The Senate bill would not only continue current law that denies legal immigrants access to Medicaid for five years, but also prohibit undocumented immigrants from buying insurance for their families in the exchanges using their own money. These provisions could leave immigrants and their families worse off, and also hurt the public health of our nation.
Now, after a year of divisive political combat, members of the House are told that they can advance health care reform only by adopting the Senate legislation as is, including these fundamental flaws. The House leadership is ignoring the pleas of pro-life members for essential changes in the legislation. Apparently they will not even try to address the serious problems on abortion funding, conscience protection and fair treatment of immigrants.

We are bishops, not politicians, policy experts or legislative tacticians. We are also pastors, teachers, and citizens. At this point of decision, we cannot compromise on basic moral principles. We can only urge — and hope and pray — that the House of Representatives will still find the will and the means to adopt health care reform that protects the life, dignity, conscience and health of all. The legislation the House adopted, while not perfect, came closer to meeting these criteria. The Senate legislation simply does not meet them.

With deep regret, but clear in our moral judgment, we are compelled to continue to urge House members to oppose the Senate bill unless these fundamental flaws are remedied. At this critical moment, we urge Representatives to take the steps necessary to ensure that health care reform respects the life and dignity of all, from conception to natural death.

This entry was posted on Sunday, March 21st, 2010 at 6:14am and is filed under Uncategorized. You can follow any responses to this entry through the RSS 2.0 feed. Both comments and pings are currently closed.