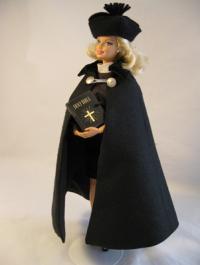 Well, I guess it was only a matter of time.  This is the work of an Episcopal priestess, Julie Blake Fisher, in Kent, Ohio.

She arrived at the church fully accessorized, as is Barbie’s custom. Her impeccably tailored ecclesiastical vestments include various colored chasubles (the sleeveless vestments worn at Mass) for every liturgical season, black clergy shirt with white collar, neat skirt and heels, a laptop with prepared sermon and a miniature, genuine Bible.

Apparently a devotee of the “smells and bells” of High Church tradition, the Rev. Barbie even has a tiny thurible, a metal vessel used for sending clouds of incense wafting toward heaven.

The Rev. Barbie, who in less than a week had drawn nearly 3,000 friends on her Facebook page, spends most of her time in the office of the Rev. Dena Cleaver-Bartholomew, rector of Christ (Episcopal) Church, in Manlius, N.Y., near Syracuse.

The doll, her wardrobe and portable sacristy were a gift from Cleaver-Bartholomew’s friend, the Rev. Julie Blake Fisher, a priest in Kent, Ohio.

“I got a phone call from my husband who said a large package had arrived;Julie had told me that she was making something for me. She used to be a dressmaker and she makes gorgeous stoles, so I thought she was making me a stole,” said Cleaver-Bartholomew. “When I came home and there was this enormous box, I knew it wasn’t just a stole!”

Fisher had made Episcopal Priest Barbie and a few vestments two years ago for the children in her parish to dress.

“I thought the children would like to practice playing with the vestments and learning what they are,” said Fisher. The Rev. Barbie was a hit with both the children and a local group of women clergy, including Cleaver-Bartholomew.

When Cleaver-Bartholomew later got called to her parish in New York, Fisher knew the perfect gift for her friend.

“I thought, `I don’t have time to make her one of her own; I’ll just send her Episcopal Priest Barbie for her farewell gift,”’ said Fisher. “But then, when I sat down to start to package everything up, I thought `What if I added this? What if I added that? What if I made this? It would just take one more day.“‘

One more day turned into 100 hours of painstaking labor, and “before I knew it, it was Episcopal Church Barbie—High Church Edition,” Fisher said.

Barbie’s clergy garb is the real deal, made from dress patterns that were crafted or adapted by Fisher. Barbie’s collared blouse was cut down from the fabric of a genuine clergy shirt; the chasubles and alb are made from real silk and linens. Her capa nigra (black funeral cloak) sports pewter buttons. Her nearly-complete Bible was originally sold as a keychain. The thurible was crafted from a teeny tea ball.

Episcopal Church Barbie’s popularity exploded after she got a shout-out on the popular blog, BeautyTipsforMinisters.com. A “Friends of Episcopal Priest Barbie” Facebook group has grown exponentially since its March 31 inception.

Go here to read the rest.  It is only a rumor that Priestess Barbie says, “Theology class is tough!”.

This entry was posted on Wednesday, April 7th, 2010 at 7:06am and is filed under Uncategorized. You can follow any responses to this entry through the RSS 2.0 feed. Both comments and pings are currently closed.