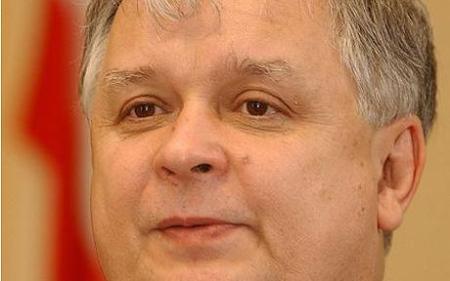 The London Daily Telegraph is reporting that Polish President Lech Kaczynski, his wife, the Polish army chief, and most of the Polish political elite and their wives perished in a plane crash over Russia.

“It clipped the tops of the trees, crashed down and broke into pieces,” Mr. Sergei Antufiev reported of the Polish plane carrying President Lech Kaczynski how it crashed.  “There were no survivors.” Polish state news agency PAP reported the same.

In the case of a president’s death, the speaker of the lower chamber of parliament, Bronislaw Komorowski, takes over as head of state, Mr Komorowski’s assistant Jerzy Smolinski told Reuters.

Poland declared a week of national mourning as shocked citizens flocked to lay flowers and light candles outside the seat of government.

Notable Catholic blogger Damian Thompson, understanding the Polish people’s propensity for conspiracy theories, is speculating that many will begin blaming a cabal of Russian agencies for this tragic accident.

Let us keep those that have died and the grieving Polish people in our prayers.

This decision is unbelievably shortsighted.

Since the rise of the influence of the abortion lobby in the Democratic party there has been fewer and fewer pro-life Democrats in office, for a number of reasons and we need not detail them here. But the point is this. The pro-life Democrats in elected office and those Democrats with “mixed views” on abortion, like them or not, have played a very important legislative role.

END_OF_DOCUMENT_TOKEN_TO_BE_REPLACED

The White House on Friday announced that Dawn Johnsen has withdrawn her nomination by Obama to head of the Office of Legal Counsel.  This was after a year during which it became increasingly clear that Republicans in the Senate, joined by some Democrats, would never vote to confirm her, and that the administration lacked the votes to break a filibuster. END_OF_DOCUMENT_TOKEN_TO_BE_REPLACED

Something for the weekend.  The Clancy Brothers pay tribute to the Easter Rising of 1916 in Dublin which, although completely unsuccessful, started a chain of events which led to Irish independence, the dream of Irish men and women for centuries.  The songs featured are Legion of the Rearguard, the Foggy Dew and God Bless England.  Ironically, Legion of the Rearguard has nothing to do with the battle for Irish independence.  It was written during the Irish Civil War which was fought in 1922-23.  The title of the song is from  Eamon de Valera, who led the rebels and who, ironically, would end up leading independent Ireland for most of the rest of the Twentieth Century, and who admitted defeat in the Irish Civil War with his usual purple prose:

Soldiers of the Republic! Legion of the Rearguard! The Republic can no longer be defended successfully by your arms. Further sacrifice of life would be in vain, and continuance of the struggle in arms unwise in the National interest. Military victory must be allowed to rest for the moment with those who have destroyed the Republic.

De Valera of course was referring in his phrase to “those who have destroyed the Republic” to men like Michael Collins, who was killed in the Civil War, who were responsible for the creation of an independent Ireland.  De Valera, at the end of the Irish fight for independence, realizing that the only terms that the British would grant which would lead to an independent Ireland would be unacceptable to many hard core Irish Republicans, refused to engage in the negotiations with the British himself, sending Collins instead, over the protests of Collins.  When Collins came back with the best treaty terms possible that would be granted by the British, de Valera denounced him and the treaty and the Irish Civil War was the result.  De Valera therefore got the benefit of the treaty terms, an Irish Free State, while still able to pose as an uncompromising champion of complete independence, something which benefited him politically to no end, for over half a century after Collins died in the Civil War de Valera started after he rejected the treaty.  Very shrewd of de Valera.  The morality I will leave for the reader to judge. END_OF_DOCUMENT_TOKEN_TO_BE_REPLACED