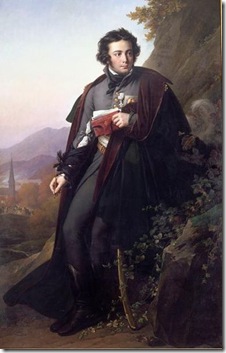 Throughout its history, France has produced some of the finest warriors for the Christian faith and the Catholic Church. I think of Charles Martel, who defeated the Muslim invaders at Tours in 732. I think of St. Louis, or Louis IX, the only French monarch made a saint for his role in the “Crusades”, his promotion of the Church, and his intense personal piety.  I think of Saint Jeanne D’Arc, the Maid of Orleans, who was inspired and instructed by God to resist the brutal English occupation of France during the Hundred Years War; a war that the Church repeatedly and unsuccessfully tried to bring to an end for all of the devastation it wrought.

The Catholic insurrection in the Vendee against the Republican government, which was a response to the ruthless repression of the Church and Catholics who refused to fully submit to the revolutionary regime, was a movement initiated almost entirely from below. It was not a manipulation of either clergy or noblemen, but rather the product of the devotion of the people to the Church herself. It had little, if anything at all, to do with defending or restoring the monarchy.

The peasants, however, needed leaders with military experience, and for that, they had to turn to the nobility. The Marquis de Bonchamps emerged as one of the finest leaders of the Vendean forces and was responsible for many of their successes on the battlefield. But with a whole country gone mad arrayed against them, the insurrectionists were not able to wage war for more than three years. The War in the Vendee culminated in mass murder bordering on genocide. It is estimated that anywhere from over 1/8th to 1/2 of the population of Vendee – that is, between 120,000 – 450,000 people – was murdered by the Republican forces.

It is striking, then, that in a war so savage and bloody, one of its leaders could conduct himself in a manner worthy of any Christian saint. According to one historian, writing of Bonchamps and his men:

The knowledge that their homes were burning could not fail to rouse the passions of the peasants, and when it became known that Bonchamps’ chateau had shared the common destruction, his troops begged to be permitted to attack the incendiaries. He was firm in his refusal. “I thank you of the proofs of your affection that you give me every day”, was their general’s reply, “but not a drop of the blood of my King’s soldiers must be shed in defense of my property.” “We shall always have enough”, he added in answer to the representations of a friend, as to the ruin he was incurring, “if I have the happiness to see my King once more upon the throne. Otherwise we shall need nothing.”

The Marquis’ finest hour came as he lie mortally wounded after the Battle of Cholet. The Catholic and royalist rebels had captured 5,000 Republican troops during the course of the campaign, and upon hearing of their beloved leader’s immanent death, were determined to slay them all in revenge. Bonchamps’ last order to his men was to spare the lives of the prisoners and release them. So adamant was the dying Marquis that he proposed that if his troops would not listen, that he be brought out and placed before the prisoners, “that your first blows shall be struck at me.”

Bonchamps’ men, upon hearing the order, cried for grace and mercy and released the prisoners to honor their general.

Having received his final sacraments, he said to the priest, who was also an old friend:

I dare to count upon God’s mercy. I have acted neither from pride, nor for the sake of retaining a reputation rendered null and void by eternity. I have not fought for Earthly glory. I desired to overthrow the sanguinary tyranny of crime and impiety. If I have not been able to raise up again the altar and the throne, I have at least defended them. I have served God, my king, and my country, and I have known how to forgive…

Can the world still produce such men, such leaders? There is no doubt in my mind that faithful Catholics will once again be compelled to find out.

This entry was posted on Wednesday, April 14th, 2010 at 6:27pm and is filed under Uncategorized. You can follow any responses to this entry through the RSS 2.0 feed. Both comments and pings are currently closed.