Was Something Different in the 60s and 70s?

Given some of the discussion on John Henry’s post yesterday about the timeline of the abuse scandal, I wanted to do a bit more digging into what the actual statistics of the scandal are.

At the NY Times website, Ross Douthat had written:

There’s no way to be completely certain about this, and clearly there was abuse in the church, and horrid cover-ups as well, going back decades and centuries and more. But the John Jay data suggest that something significant really did shift, and escalate, in the years around the sexual revolution.

For one thing, the rate of so-called “short term” incidents — cases where the priest’s abusive behavior reportedly lasted less than a year — remained relatively constant from the ’50s through the first decade of the 21st century. The prevalence of longer-term abuse, on the other hand, followed the same pattern as the overall data, going way up in the ’60s and ’70s and then dropping off after 1980 (see pp. 39 of this report for the graph). The same discrepancy appears when you look at the type of molestation: male-on-female versus male-on-male, and true pedophilia versus so-called “ephebophilia” (the abuse of pubescent teenagers). To quote from the National Review Board report, which analyzed the John Jay data:

If the abuse in the ’50s (and earlier) followed roughly the same pattern as the abuse in the ’70s, and just remains more underreported today, you would expect the ratios of different types of abuse — long-term versus short-term, male versus female, pedophilic versus ephebophilic — to remain relatively constant across the decades. But they don’t: Instead, the post-1960 period shows a dramatic increase in reports of long-term sexual misconduct with teenage boys, and a substantially smaller increase in other types of abuse.

The John Jay report does a fair amount of statistical analysis on the number of events reported, when they took place, and the lag time between event and report and concludes (on page 24 of the report):

In summary, the several forms of modeling and estimation of the unreported cases of child sexual abuse by Catholic priests produced consistent results. The dramatic number of cases reported in the year 2002 could not have been predicted simply on the basis of the prior years’ data and calculation of lags to time of disclosure. The decline in cases in the 1990s that can be seen on all of the preceding charts is confirmed to be not simply a decline in reporting of cases, but in the incidence of unreported events.

While it’s always possible that there’s some unknown factor at play — and indeed, the John Jay report spends a fair amount of time analyzing how lack of reporting disguised the 1960-1980 abuse peak from studies done in 1985 and 1993 — there has been a fair amount of analysis done which seems to both rule the possibility that 1950 to 1960 abuse patterns were just as high as 1960 to 1980, and also that the rate of abuse has continued unabated since 1980, rather than reducing significantly as the John Jay data shows. Analysis in, in fact, work, and a fair amount of it has been done. (Looking at a graph for thirty seconds before saying, “Oh yeah, I bet…” is not analysis.) So while we should be open to new data or analysis, I think it’s worth taking the conclusions which the John Jay College of Criminal Justice people did with a fair amount of seriousness and not dismissing them out of hand.

A couple other things jump out of the Jay Report while we’re at it.

First off, this is not simply a story of “the bad days of Vatican II”. The combination of the “sexual revolution” and the internal chaos within the Church in the late 60s through the 70s is clearly a factor here. But take a look at this graph of abusive priests by ordination date: 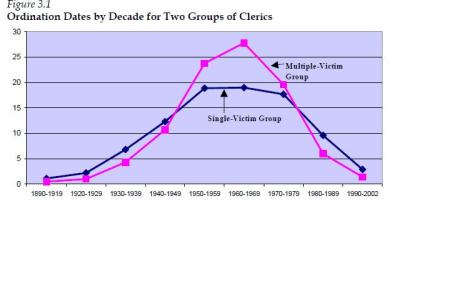 Many of the priests who would go on to become abusers in the 60s and 70s were ordained during the 40s and 50s. As with the rest of the chaos of the 60s and 70s, there was clearly a great deal of weakness that came before. Clearly, there must have been some serious problems in seminaries in the 40s and 50s when the priests who later, in the midst of cultural and institutional chaos would go on to become abusers.

Again, this seems to suggest that there was something wrong in the culture and in the church hierarchy during the 60s and 70s which allowed persistent abuse to occur unchecked.

This entry was posted on Tuesday, April 20th, 2010 at 12:51pm and is filed under Uncategorized. You can follow any responses to this entry through the RSS 2.0 feed. Both comments and pings are currently closed.

3 Responses to Was Something Different in the 60s and 70s?