If You Heard Palestinians Playing the Violin, You’d Understand

Ross Douthat has a good post on his NY Times blog responding to Adam Gopnik’s New Yorker piece on the search for “the historical Jesus”.

James Tabor, a professor of religious studies, in his 2006 book “The Jesus Dynasty,” takes surprisingly seriously the old Jewish idea that Jesus was known as the illegitimate son of a Roman soldier named Pantera—as well attested a tradition as any [emphasis mine — RD], occurring in Jewish texts of the second century, in which a Jesus ben Pantera makes several appearances, and the name is merely descriptive, not derogatory.

The whole problem with two centuries worth of historical Jesus scholarship is summed up in those seven words: “As well attested a tradition as any.” Because obviously if you don’t mind a little supernaturalism with your history, a story about Jesus being a Roman soldier’s bastard that dates from the second century — and late in the second century, at that — is dramatically less “well attested” than the well-known tradition (perhaps you’ve heard of it) that Jesus was born of a virgin married to Joseph the carpenter, which dates from the 70s or 80s A.D. at the latest, when the Gospels of Luke and Matthew were composed. Bracket the question of miracles, and there’s really no comparison: Giving the Roman soldier story equal weight with the accounts in Matthew and Luke is like saying that a tale about Abraham Lincoln that first surfaced in the 1970s has just as much credibility as a story that dates to the 1890s (and is associated with eyewitnesses to Lincoln’s life).

END_OF_DOCUMENT_TOKEN_TO_BE_REPLACED

It was September of 1966, and gas was gushing uncontrollably from the wells in the Bukhara province of the Uzbek Soviet Socialist Republic. But the Reds, at the height of their industrial might, had a novel solution. They drilled nearly four miles into the sand and rock of the Kyzyl Kum Desert, and lowered a 30-kiloton nuclear warhead — more than half-again as large as “Little Boy,” the crude uranium bomb dropped over Hiroshima — to the depths beneath the wellhead. With the pull of a lever, a fistful of plutonium was introduced to itself under enormous pressure, setting off the chain reaction that starts with E = MC2 and ends in Kaboom! The ensuing blast collapsed the drill channel in on itself, sealing off the well.

The Soviets repeated the trick four times between 1966 and 1979, using payloads as large as 60 kilotons to choke hydrocarbon leaks. Now, as the Obama administration stares into the abyss of the Deepwater Horizon spill, and a slicker of sweet, medium crude blankets the Gulf of Mexico, slouching its way toward American beaches and wetlands, Russia’s newspaper of record is calling on the president to consider this literal “nuclear option.”

As well he should. It’s a little less crazy than it sounds. The simple fact is that the leak has confounded all conventional efforts to quell it, forcing British Petroleum and its federal overseers to resort to a series of untested, increasingly unwieldy, and heretofore unsuccessful backup plans as the American people’s impatience and rage grow at geometric rates. In the madness that is Deepwater Horizon, The Bomb may be the sanest choice. 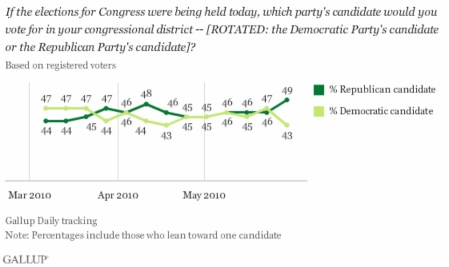 END_OF_DOCUMENT_TOKEN_TO_BE_REPLACED

The Vultures Descend on Governor Brewer

185 news articles, blurbs, blogs, columns, and other scraps of Internet. 185, as of 11:40 p.m. Arizona time today. 185 pieces of electronic information posted on what is perhaps the most asinine news item of the day: Arizona governor Jan Brewer’s statement about her father. This is what Brewer said:

“Knowing that my father died fighting the Nazi regime in Germany, that I lost him when I was 11 because of that… and then to have them call me Hitler’s daughter. It hurts. It’s ugliness beyond anything I’ve ever experienced”

The governor was of course responding to the tiresome and blatantly unfair criticism directed at her and most of the state of Arizona over SB 1070, a bill that several Obama regime hacks can’t even be bothered to read before resorting to vilification. This is not to say that legitimate criticism of the bill isn’t possible, of course, but that isn’t what caused Brewer personal harm.