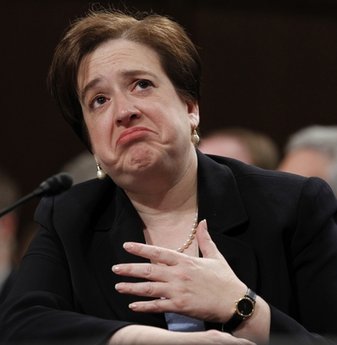 Supreme Court nominee Elena Kagan was asked yesterday about her falsification of evidence detailed here.  Her response was a classic example of Beltway Weaselspeak:

“Did you write that memo?” Hatch asked.

“Senator, with respect,” Kagan began, “I don’t think that that’s what happened — ”

“Did you write that memo?”

“The memo that caused them to go back to the language of ‘medically necessary,’ which was the big issue to begin with — ”

“The document is certainly in my handwriting.”

Although Kagan later explained her thinking in the memo — she said she was only trying to help the medical group express its true opinion — and it was clear that she did write the memo, she looked slippery in her attempt to avoid openly admitting that she did so.  That won’t sit well with skeptical senators.

I was unable to watch Kagan’s explanation of her role in the ACOG policy statement live, but I understand from Ed Whelan’s excellent coverage that she essentially brushed off the issue (as I predicted here she would), explaining that she was merely helping ACOG state more clearly what the evidence before it already showed.

As I explained, however, there are reasons to doubt that. First, the ACOG task force — formed specifically and solely for the purpose of studying the medical efficacy of the procedure — met for two full days in October 1996, and the result of their collective work was a statement concluding only that it could identify no particular circumstances where the partial-birth method might be the only method to save the health or life of the mother, but that the committee thought it important to leave that judgment to the individual doctors — that is, a policy statement that Congress should stay out of it. After they deliberated in October 1996, the task force forwarded its draft statement to the ACOG board. It was only then that Kagan stepped in to suggest changes.

Therefore, any suggestion that her work was merely the synthesis of the task force’s deliberations doesn’t account for that time line — she had no interaction with the task force itself, only the executive board of ACOG.

Second and more significant, the White House had already met with ACOG’s former president and current chief lobbyist (to whom Kagan’s revisions were addressed) in June 1996, before the special task force was even formed. At that meeting (which apparently Kagan did not attend but recounted in a memo to her bosses, dated June 22, 1996), Kagan wrote that the White House staffers were basically told that ACOG couldn’t identify any particular circumstances where the procedure was medically necessary. But, to be fair, let’s quote her memo in relevant part:

2. Melanne, Todd, Jennifer Klein, John Hart, and someone from Betsy Myers’s office met a few days ago with the former President and the current chief lobbyist for the American College of Obstetrics and Gynecology (ACOG). For many months, the folks at ACOG had been unwilling to speak with us about the medical issues surrounding the partial birth ban, but Marilyn Yeager convinced them to do so, and this meeting was the result. It was something of a revelation.

Two important points emerged from the meeting. First, there are an exceedingly small number of partial birth abortions that could meet the standard the President has articulated. In the vast majority of cases, selection of the partial birth procedure is not necessary to avert serious adverse consequences to a woman’s health; another option — whether another abortion procedure or, in the post-viability context, birth through a caesarean section, induced labor, or carrying the pregnancy to term — is equally safe .. I will spare you all the medical details here. Suffice it to say that we went through every circumstance imaginable — post- and pre-viability, assuming malformed fetuses, assuming other medical conditions, etc., etc. — and there just aren’t many where use of the partial-birth abortion is the least risky, let alone the “necessary,” approach. No one should worry about being able to drive a truck through the President’s proposed exception; the real issue is whether anything at all can get through it.

Second and relatedly, of the five women who came to the White House, only two can truly say (though they all apparently believe) that the partial birth procedure was the least risky of their alternatives. Again, I’ll spare you the details, but the other three — all of whom were carrying malformed fetuses in the third trimester — could have given birth, either through induction or through carrying the fetus to term, without serious risk to their health. (The partial birth procedure in these cases was the least risky method of abortion, but this is not a strong argument, given that all these fetuses were post-viability -when most states, and the President himself, would prohibit all abortions except for life or health reasons.)

Those present at the meeting all agreed, on the basis of the thoroughness and care of the ACOG presentation, that these two points are probably just true, rather than a matter of medical opinion. (Betsy Myers and Jeremy Ben-Ami, neither of whom attended the meeting, have expressed the view that some other doctor might say something different.)

Go here to read the rest.

Too bad that Kagan was not more forthright in her answers yesterday.  However, a brilliant commenter at Ace of Spades, ExurbanKevin, has taken up the slack for her:

“Kagan: You want answers?
Hatch: I think I’m entitled.
Kagan: *You want answers?*
Hatch:*I want the truth!*
Kagan: *You can’t handle the truth!*
[pauses]
Kagan: Son, we live in a world that has babies, and (some of) those (need to) be killed. (Who is) gonna do it? You? You, Senator Coburn? I have a greater responsibility than you could possibly fathom. You weep for your children, and you curse Planned Parenthood. You have that luxury. You have the luxury of not knowing what I know. That our children, while cute, get in the way of feminism. And my existence, while grotesque and incomprehensible to you, allows for Gloria Steinham to keep ranting. You don’t want what I call the truth because deep down in places I don’t talk about at parties, I know you’re right. I use words like right to choose and women’s privacy. We use these words as the backbone of an industry that kills babies. You use them as (a) way to celebrate the sanctity of life. I have neither the time nor the inclination to explain myself to a man, any man, anywhere, because I’m a woman and you’re not. I would rather you just said thank you, and went on your way, Otherwise, I suggest you pick up a knife and castrate yourself. Either way, I don’t give a damn what you think you are entitled to.
Hatch: Did you write this memo?
Kagan: I did the job I…
Hatch: *Did you write this memo?*
Kagan: *You’re Go—-ned right I did!*

This entry was posted on Thursday, July 1st, 2010 at 5:33am and is filed under Uncategorized. You can follow any responses to this entry through the RSS 2.0 feed. Both comments and pings are currently closed.

8 Responses to Elena Kagan: “I’m sorry-the memo which is?”