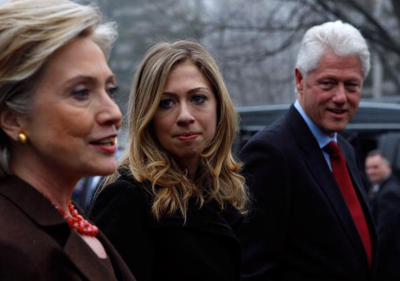 The estimated cost of Chelsea Clinton’s wedding this evening is $1 million* and that is a very low estimate.

Talk about failing in the cardinal virtues of prudence and temperance.

With so much suffering and poverty in the world the cost of this wedding is very selfish**.

The wedding itself is a joyful event to celebrate the cleaving of one man and one woman, though the cost that the Clinton’s have incurred are simply imprudent and antitemperant to put it lightly.

Coming from a scion of the Democratic Party that claims to be for the poor, this isn’t unusual.  It’s a typical mindset of most Democrats that would rather take other peoples money to redistribute rather than their own for the common good.

How can I say they are selfish if they are spending the money to celebrate a joyful event?

It is selfish because instead of spending the money for the poor they spent it on themselves.

** Talk about stealing from the poor.

This entry was posted on Saturday, July 31st, 2010 at 12:17pm and is filed under Uncategorized. You can follow any responses to this entry through the RSS 2.0 feed. Both comments and pings are currently closed.