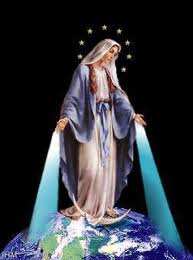 You may be wondering why there is a big picture of the Blessed Mother to lead off the post. It’s simple. I and the rest of us clad in purple & gold owe her. Big time. On the 4th down play and the last play of the game (both of them), I was furiously saying the Hail Mary in the LSU student section. If those flags aren’t miraculous intercession, I don’t know what is. I have prayed like that during a game twice-the NFC championship game against the Vikings and the LSU v. Auburn game in 2007 (Byrd’s catch with a second left-the most beautiful pass & catch I’ve seen in Death Valley). These Tigers are going to kill me, and even though they should have slaughtered the Vols, that was a rare and fun experience.

In the rest of the college football world, we now have clear front-runners in the top 2 conferences. Oregon will need a major upset to lose the PAC-10, and Alabama made quite a statement to the rest of the SEC West. In the Big 12, Oklahoma looks to take the Big 12 South with the win in the Red River Rivalry. The Big 10 is still wide open, and the ACC is anyone’s guess.

What is becoming clearer is that Boise St. is likely out of luck this year. Their wins are not nearly as impressive as the displays put on by Bama and Oregon. Even if those teams lose once, they’re still over Boise (or a team that beats them in route to a undefeated or 1 loss year). I think Nebraska and Ohio St. have a chance to break into the picture, but I think it’s SEC champ v. PAC-10 champ in the title game this year.

Of course, that could change dramatically in a week, which is what makes this so much fun.

In other college football news, Texas A&M learned you can’t turn the ball over 5 times and win (you can with 4-see Louisiana State University *Good God, how did we win that game? Thank you Blessed Mother!*).  This was a real pity, b/c watching them Thursday they have a great team. They’ll be a wild card in the South, but if they could control the turnovers they could be scary. You have to think they’ll control them in one or two games that they’ll steamroll someone they’re not supposed to; question is when.

Round up the recap, Notre Dame won the Pope bowl, USC finally lost, and Denard Robinson can probably start thinking about what pose he wants for his portrait next to the other Heisman winners. To the rankings!

We had 5 voters this week, as MJ wimped out on us (apparently, he had “more important” things to do. Jeesh. Your wife having a baby isn’t that big of a deal 😉 ). 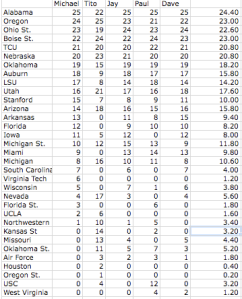 This entry was posted on Monday, October 4th, 2010 at 4:56pm and is filed under Uncategorized. You can follow any responses to this entry through the RSS 2.0 feed. Both comments and pings are currently closed.