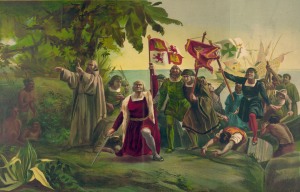 Few days provide so great an occasion for an orgy of self-hatred (among the white elites) and faux moral outrage as Columbus Day. But long before communists, socialists, and their fellow-travelers seized control of our educational institutions and rewrote the history of the Western civilization – a revision which is force-fed to most students in our public reeducation centers – Columbus was celebrated as a great explorer and a daring adventurer who undertook great hardships to undergo the voyage that would lead to the discovery of the New World. Pope Leo XIII, on the 400th anniversary (1892) of that famous voyage, wrote of Columbus in Quarto Abeunte Saeculo:

By his toil another world emerged from the unsearched bosom of the ocean: hundreds of thousands of mortals have, from a state of blindness, been raised to the common level of the human race, reclaimed from savagery to gentleness and humanity; and, greatest of all, by the acquisition of those blessings of which Jesus Christ is the author, they have been recalled from destruction to eternal life.

Indeed, Columbus Day holds a special significance for Catholics, because it marks the beginning of the transformation of the Americas from a landscape of unbridled savagery, reaching its demonic apotheosis in the mass human sacrifices carried out by the Aztecs, to a hemisphere consecrated to Christ. Leo’s words also remind us of a truth that has been forgotten by some, rejected by others, and denounced in the modern and post-modern world, even by many Catholics: that without the light of the Gospels and incorporation into the mystical body of Christ (which is the Church), salvation is impossible to attain.

Much of the contemporary hatred for Columbus is based upon the work of Bartolomé de las Casas, a Spanish priest and contemporary of Columbus who wrote books such as “A Short Account of the Destruction of the Indies.” His initially noble devotion to the cause of the indigenous Americans eventually gave way to a sort of fanaticism that lead him to distort the truth and become increasingly aggressive in his campaigns on their behalf. Las Casas’ modus operandi ought to be familiar to those of us who encounter ideological zealots even today. The Catholic Encyclopedia sums up his attitude in the following way:

Las Casas was a man of great purity of life and of noble aspirations, but his conviction that his own views were flawless made him intolerant of those of others.

Intolerance and idealism, operating together – you don’t say! And when we add his intellectual pride to the mix, we almost have a portrait of a modern academic:

Although for over fifty years an ecclesiastic, he always remained under the spell of his early education as a lawyer. His controversy with Juan Ginés de Sepúlveda on the Indian question is a polemic between two juris-consults, adorned with, or rather encumbered by, theological phraseology.

Because this man’s work is often the primary source of anti-Columbus, anti-Catholic and anti-Western harangues, his entry in the Encyclopedia is well worth reviewing.

In the first place, Las Casas, though he is reported to have later regretted it, owned and imported black slaves to the Spanish colonies. Thus his zeal for the welfare of the Indians was not matched in his attitude towards Africans. In the second place, as the Encyclopedia states, Las Casas was prone to wild exaggerations:

He exaggerated the number of aborigines on the island at the time of discovery, and magnified into a deed of revolting cruelty every act which savoured of injustice. Sober common sense demands the revision and correction of his indictments… Everywhere he found abuses, and everywhere painted them in the blackest colours, making no allowances for local conditions or for the dark side of the Indian character.

Las Casas was so intolerant that he ended up alienating many potential supporters for his ideas in Spain:

The strong support which Las Casas found in Spain discredits the accusations of tyranny brought against the Spaniards by Las Casas himself and by his partisans. His violent denunciations were not only unjust, but extremely ungrateful. Throughout his career he never lacked either the means for support or for carrying out his schemes. But his vehemence and sweeping injustice estranged more and more those who, fully desirous of aiding the Indians, had to acknowledge that gradual reform, and not sudden revolution, was the true policy.

The “black legend” of distortions and half-truths that this angry fanatic created about the Spanish presence in the New World was also accompanied by a black legend about Columbus, for it is Las Casas’ version of Columbus’ journal that survives down to the present day – not his original. As the Encyclopedia entry on Columbus states:

Las Casas claims to have used the journal of Columbus’s first voyage, but he admits that he made an abridged copy of it. What and how much he left out, of course, is not known. But it is well to bear in mind that the journal, as published, is not the original in its entirety.

Suffice to say that I see no good reason, nor should you, to have faith in this man’s account of Columbus, of his motives or his actual deeds, or his reflections upon them. I don’t believe for a moment that Spanish soldiers were testing the sharpness of their blades upon hapless and innocent native victims, for instance; it and other reports of extreme barbaric cruelty have “ideological exaggeration” written all over them.

It furthermore seems nearly impossible to me that Pope Leo XIII, who could look back proudly upon a Papal legacy of anti-slavery especially regarding indigenous Americans (even if their explicit prohibitions and condemnations of it were ignored), would have simultaneously held Columbus in such high regard if he really were the monster Las Casas makes him out to be.

What we are really witnessing in the controversies surrounding Columbus Day is an attempt to force a “new truth” down our throats, and to bring upon us shame, regret, and repentance before the new gods of multiculturalism and relativism. In my view, Catholics can and ought to be proud of the Spanish legacy in the New World. The “genocide” with which the Spaniards are charged is often dishonestly derived from the tragic and unintentional spread of disease from the Europeans to the native populations, an effect that no one desired or planned for. The destruction of the Aztec Empire, on the other hand, was entirely justified, given that its rulers were engaging in a genocide of their own, engaging in mass human sacrifices that claimed tens of thousands of victims annually.

To this it will finally be added that we can be proud of the missionary work, especially by the Jesuits, that delivered so many millions from spiritual darkness. The Spanish presence in the Americas seems to have been a part of God’s plan, for it was in 1531, a mere 39 years after Columbus’ initial voyage, that Our Lady of Guadalupe appeared before Juan Diego. The image that she imparted to him was responsible for the conversion of millions of indigenous people to the Catholic faith, even as millions of Europeans were falling away from it and into Protestantism. No, I certainly will not apologize for that. And neither would Pope Leo:

Columbus threw open America at the time when a great storm was about to break over the Church. As far, therefore, as it is lawful for man to divine from events the ways of Divine Providence, he seemed to have truly been born, by a singular provision of God, to remedy those losses which were awaiting the Catholic Church on the side of Europe.

This entry was posted on Monday, October 11th, 2010 at 6:00am and is filed under Uncategorized. You can follow any responses to this entry through the RSS 2.0 feed. Both comments and pings are currently closed.

37 Responses to Columbus Day: No Apologies