Note to Pro-Life Republican Party Leaders: Use The Bully Pulpit 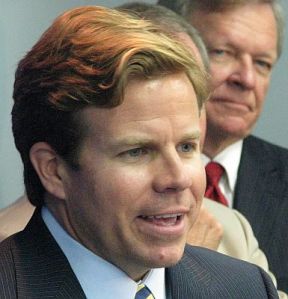 Incoming Florida State Senate Leader Mike Haridopolos needs to step it up when it comes to explaining and educating the public on why Abortion is such a huge issue, and should be made a top priority in Florida and the rest of America.

One of my biggest beefs with Republicans and many Republican pro-lifers is that there seems to be almost an embarrassment over the issue of Abortion, if the audience is not already overwhelmingly pro-life. My own experience in running against a pro-life Republican was one where I was the one bringing up the issue as a pro-life Democrat, even as that was not sitting well with my own base, while my opponent seemed content to just sit back and cash in his Right to Life organizational endorsement.

Just this Sunday, I’m reading Florida Today Newspaper, and I find an interview with incoming Florida State Senate President Mike Haridopolos and one of the questions in the paper reads as follows:

“On supporting Nebraska-style abortion limits:  “If this bill is pursued by a member, it will be given the normal committee structure and it will have to work through it, and get an up or down vote.  But what I can promise you is that where my focus is and where Dean’s and Rick’s [Scott, new Governor of Florida] is, is on the economy.

Now- I am willing to give the benefit of the doubt that Haridopolos and Governor Scott will support any pro-life legislation that is able to “get through the process”.  My beef is that the other half of the priviledge in being a Representative of the People, is to have access to the Bully Pulpit- defined as the follows from Wikipedia:

” bully pulpit is a public office or other position of authority of sufficiently high rank that provides the holder with an opportunity to speak out and be listened to on any matter. The bully pulpit can bring issues to the forefront that were not initially in debate, due to the office’s stature and publicity.

This term was coined by President Theodore Roosevelt, who referred to the White House as a “bully pulpit,” by which he meant a terrific platform from which to advocate an agenda. Roosevelt famously used the word bully as an adjective meaning “superb” or “wonderful” (a more common expression in his time than it is today).

The term is not related to the noun bully, i.e., a harasser or someone who intimidates.”

Not since the issue of Chattel Slavery has there been an issue so one-sided in the favor of the side calling out for the rights of those ignored by society- the enslaved, and the aborted-  huge injustices.  But the modern-day pro-life politician seems mostly uncomfortable and vague when the issue of Abortion is thrown at them- that is unless the event is “safe” and the expectation is that a little red meat will be thrown to the activist class who will help you get elected.

For me it is one thing to say that by voting for Republican Joe So-And-So, he is the lesser of two evils, he is modestly pro-life- he will vote for some things the pro-lifers want, but he isn’t going to go out of his way to initiate anything, and he certainly isn’t going to try to educate or convert anyone to see the Light of Pro-Life.  But when I see Republican Pro-Lifers lavishing praise on the Republican Party in general, and making many of these “lukewarm” Pro-Life Representatives out to be great Statesmen and Defenders of the Unborn- I’m not buying what they are selling.

The Republicans and their Tea Party friends have been granted a big opportunity- it sounds to me like they are going to go big for the prudential issues where they may or may not be right, but on the issue of abortion where they have something very real and compelling to say and legislate- I am wary of their intentions.  I hope that the Pro-Life Republican base actually uses their clout to get at least some legislative initiatives through to law, but will they push their Reps to do more preaching to the unconverted- to use that bully pulpit to teach the young and the open-minded, during all those visits around the community and speeches delivered to schools and organizations? I’m not seeing that for now- I’m seeing a lot of excitement over tax cuts and reducing regulatory oversight on corporations- but where is the pro-life fervor on the part of the pro-life politicians?

This entry was posted on Tuesday, November 9th, 2010 at 2:02pm and is filed under Uncategorized. You can follow any responses to this entry through the RSS 2.0 feed. Both comments and pings are currently closed.

5 Responses to Note to Pro-Life Republican Party Leaders: Use The Bully Pulpit