This past semester was unusual. In previous years, I had students who might have disagreed with the Church’s position but they did so respectfully and without incident.  This semester (Spring 2010) I noticed the most vociferous reaction that I have ever had. It seemed out of proportion to all that I had known thus far. To help students understand better how this issue might be decided within competing moral systems, I sent them an email contrasting utilitarianism (in the populist sense) and natural moral law. If we take utilitarianism to be a kind of cost-benefit analysis, I tried to show them that under utilitarianism, homosexual acts would not be considered immoral whereas under natural moral law they would. This is because natural moral law, unlike utilitarianism, judges morality on the basis of the acts themselves.

After the semester was over, I was called into the office of Robert McKim, the chairman of the Department of Religion, who was in possession of this email. I was told that someone (I presume one of my students) sent this email to the Office of Gay, Lesbian, Bisexual, and Transgendered Concerns at the University. It was apparently sent to administrators in the University of Illinois and then forwarded on to Professor McKim. I was told that I would no longer be able to teach in the Department of Religion.

Professor McKim and I discussed the contents of the email and he was quite insistent that my days of teaching in the department were over. I offered that it would be more just to ask me not to address the subject of homosexuality in my class. In fact, the other class I regularly taught (Modern Catholic Thought) never dealt with that subject at all. I also averred that to dismiss me for teaching the Catholic position in a class on Catholicism was a violation of academic freedom and my first amendment rights of free speech. This made no difference. After that conversation and a couple of emails, Professor McKim insisted that this decision to dismiss me stood firm.

The Newman Center and the Diocese of Peoria did not stand behind Howell initially, seeming to want to avoid a conflict with the University.  Dr. Howell contacted the Alliance Defense Fund which contacted the University and threatened to file suit.  Catholic bloggers raised a huge hue and cry about the firing.  Eventually the firing decision was reversed, and Dr. Howell was re- hired to teach Introduction to Catholicism in the fall semester of this year.  However, the contract between the Newman Center and the University of Illinois was ended, and Dr. Howell would simply teach the course as a regular adjunct professor of  the University.

The faculty committee has finished its examination of the firing of Dr. Howell.  Inside Education has obtained a leaked copy of the report, and a story on the report may be read here, along with a link to the report. END_OF_DOCUMENT_TOKEN_TO_BE_REPLACED

Victory! Dr. Ken Howell Reinstated at the University of Illinois!

Dr. Kenneth Howell, the adjunct professor at the University of Illinois who was fired for teaching Catholic doctrine regarding homosexuality in a class on Catholicism has been reinstated by the University.  Here is the press release from the Alliance Defense Fund that represented Dr. Howell:

CHAMPAIGN, Ill. — The University of Illinois at Champaign-Urbana confirmed to Alliance Defense Fund attorneys Thursday that it will once again allow popular professor Dr. Kenneth Howell to teach on Catholicism after recently firing him for explaining the Roman Catholic Church’s position on human sexual behavior to members of his class.

ADF attorneys representing Howell sent a letter to university officials on July 12 explaining that the university’s actions violated his rights protected by the First Amendment and asked that he be reinstated.

“A university cannot censor professors’ speech–including classroom speech related to the topic of the class–merely because certain ideas ‘offend’ an anonymous student. We greatly appreciate the university’s move to put Professor Howell back in the classroom, but we will be watching carefully to make sure that his academic freedom is protected throughout the university’s ongoing process,” said ADF Senior Counsel David French.

The letter then adds that a university committee will continue its investigation of Howell’s situation.

Howell, who had been teaching at the university since 2001, was relieved of his teaching duties based in part on an anonymous complaint sent via e-mail to university officials. The e-mail was sent by the friend of an anonymous student who claimed to be “offended” by a May 4 e-mail Howell sent to students elaborating on a class discussion concerning Catholic beliefs about sexual behavior.

The May 4 e-mail from Howell addressed a May 3 lecture in which he explained how the Roman Catholic Church distinguishes between same-sex attraction and homosexual conduct. He accurately stated the church’s teaching that homosexual conduct is morally wrong, framing the issue in the context of natural moral law.

END_OF_DOCUMENT_TOKEN_TO_BE_REPLACED

Firing of Dr. Kenneth Howell to be Reviewed By University of Illinois Committee

Last week I wrote here about the firing of Dr. Kenneth Howell who had the audacity, in a class about the Catholicism, to actually state Catholic doctrine about homosexuality.  There has been enough of a furor since that the University of Illinois is acting, according to this story in the Chicago Tribune:

A faculty group at the University of Illinois’ flagship campus will review the decision to fire an adjunct religion professor for saying he agreed with Catholic doctrine on homosexuality.

Urbana- Champaign campus Chancellor Robert Easter said Monday he hopes to have a decision on the firing of Kenneth Howell from the Faculty Senate’s Committee on Academic Freedom and Tenure by the time fall classes start. The review is to determine whether Howell’s academic freedom was violated.

“We want to be able to reassure ourselves there was no infringement on academic freedom here,” new university President Michael Hogan told members of the Faculty Senate on Monday. “This is a very, very important, not to mention a touchy and sensitive, issue. Did this cross the line somehow?” END_OF_DOCUMENT_TOKEN_TO_BE_REPLACED

Anti-Catholic Bigotry Alive and Well at the University of Illinois

I am an alum of the U of I.  I obtained my BA in 79 and my JD in 82.  My wife is also an alum of the U of I, obtaining her MA in Spanish in 82.  Our eldest son will be entering the U of I as a freshman in August.  I therefore found the news that  Professor Kenneth Howell, an adjunct Professor at the University of Illinois, has been fired for teaching in a course about Catholicism  basic Catholic doctrine on homosexuality quite alarming:

END_OF_DOCUMENT_TOKEN_TO_BE_REPLACED 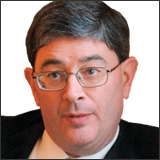 In it cites the extremist attacks in expressing our Catholic faith in the public square.

The forms of these attacks are egregious because they that attack us are also tearing apart the moral fabric of this nation.

Case in point is the Washington Post, and in my opinion they represent secular humanism, when it comes to natural law they painted those that hold to natural law as extremists:

This past October, in the heat of a political campaign, the nation’s political newspaper of record, the Washington Post, ran an editorial condemning what it termed the “extremist views” of a candidate for attorney general of Virginia who had suggested that the natural moral law was still a useful guide to public policy.

END_OF_DOCUMENT_TOKEN_TO_BE_REPLACED

The Liberal Dystopia of Political Correctness

In our world today we are living in what I would refer to as the Liberal Dystopia of Political Correctness.  This thing that our current Holy Father warned us about.

As secular humanism continues its march towards a Dictatorship of Relativism we innocent bystanders suffer the consequences of its fruits when prejudice is rewarded and common sense rejected.

Five years ago this month, in the Mass prior to the Conclave of 2005 A.D., then Joseph Cardinal Ratzinger warned us in his homily that:

“We are building a dictatorship of relativism that does not recognize anything as definitive and whose ultimate goal consists solely of one’s own ego and desires.”

An excellent example of this dictatorship of relativism or as I would name it, liberal dystopia, is the United Kingdom’s Foreign Office anti-Catholic memo on the preparation of Pope Benedict’s visit to Britain.

In this event Anjoum Noorani, another Oxford educated civil servant* of the U.K. Foreign Office, who headed the Papal Visit Team that was planning the Pope’s visit to Britain was only verbally reprimanded for his part in approving and distributing the anti-Catholic memo.

What makes this worse is that the Foreign Office advertised the requirements for the position to lead the Papal Visit Team as “Prior knowledge of the Catholic church is not necessary“.

To add some irony the advertisement also stated, “High levels of tact and diplomacy will be required.”