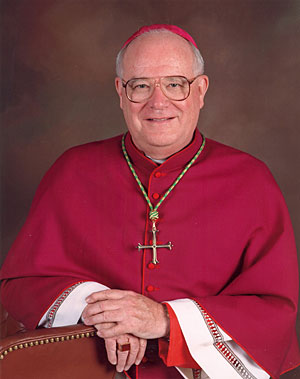 A few weeks ago I had posted my thoughts on Nancy Pelosi’s scadalous Newsweek interview, in which she chalked up her disagreements with the Bishops on Catholic moral teaching as a “difference of opinion.” At the time I had expressed my curiosity (and honest frustration) as to when her local bishop, George H. Niederauer, would be moved to respond.

He has, and I am thankful for it:

END_OF_DOCUMENT_TOKEN_TO_BE_REPLACED

Are You Listening Madame Speaker?

Archbishop George H. Niederauer of San Francisco addressed on January 13, 2010 a free will defense of abortion by Nancy Pelosi, Speaker of the House:

In a recent interview with Eleanor Clift in Newsweek magazine (Dec. 21, 2009), House Speaker Nancy Pelosi was asked about her disagreements with the United States Catholic bishops concerning Church teaching. Speaker Pelosi replied, in part: “I practically mourn this difference of opinion because I feel what I was raised to believe is consistent with what I profess, and that we are all endowed with a free will and a responsibility to answer for our actions. And that women should have the opportunity to exercise their free will.”

Embodied in that statement are some fundamental misconceptions about Catholic teaching on human freedom. These misconceptions are widespread both within the Catholic community and beyond. For this reason I believe it is important for me as Archbishop of San Francisco to make clear what the Catholic Church teaches about free will, conscience, and moral choice.

Catholic teaching on free will recognizes that God has given men and women the capacity to choose good or evil in their lives. The bishops at the Second Vatican Council declared that the human person, endowed with freedom, is “an outstanding manifestation of the divine image.” (Gaudium et Spes, No. 17) As the parable of the Grand Inquisitor in Dostoevsky’s novel, The Brothers Karamazov, makes so beautifully clear, God did not want humanity to be mere automatons, but to have the dignity of freedom, even recognizing that with that freedom comes the cost of many evil choices.

END_OF_DOCUMENT_TOKEN_TO_BE_REPLACED

“I agree with the Church in principle, but …”

Last week I posted a reaction to House Speaker Pelosi’s interview in Newsweek (cross-posted to First Things‘ “First Thoughts”). Perusing the comments, I discovered that the author of No Hidden Magenta — a blog with the daunting task of “bridging the gap between ‘Red and Blue State’ groupthink” — has responded with fury and dismay:

At least one reason why neither the Pope nor the Archbishop have denied Pelosi Holy Communion–despite having ample opportunity to do so–is because prudential judgments about how best to reflect a moral principle in public policy involved technical considerations of practical reason that do not go to the heart of what it means to be a Roman Catholic; in other words, they are not about the central value at stake. If Speaker Pelosi believes that abortion is a positive good that should be promoted by the state (rather than as a privacy right for all women) that is one thing (and her recent actions with regard to Stupak suggest that she doesn’t think this), but there are any number of good reasons for supporting less-than-perfect public policy as she claims to be doing in trying to reduce the number of abortions while not supporting an abortion ban. …

Now, we can and should have debate about this question–and I think Pelosi is profoundly mistaken in her position on public policy–but let’s be clear: both the Pope and her Archbishop do not think such a position puts her status as a Roman Catholic or as a communicant in jeopardy. And those who think it does would do well to follow their example in distinguishing between ‘moral principle’ and ‘public policy.’

I’m relieved that the author believes Pelosi is “profoundly mistaken” in her position on public policy. I’m less convinced, however, that “the Pope and her Archbishop do not think such a position puts her status as a Roman Catholic or as a communicant in jeopardy”, and the author’s explanation for why they allegedly do not think so.

END_OF_DOCUMENT_TOKEN_TO_BE_REPLACED

Nancy Pelosi to Bishops on Abortion: I practically mourn this difference of opinion

House Speaker Nancy Pelosi was interviewed in a recent edition of Newsweek, in which she had the opportunity to set the bishops straight on the participation of Catholics in public life.

I think you have had some brushes with [church] hierarchy.

I have some concerns about the church’s position respecting a woman’s right to choose. I have some concerns about the church’s position on gay rights. I am a practicing Catholic, although they’re probably not too happy about that. But it is my faith. I practically mourn this difference of opinion because I feel what I was raised to believe is consistent with what I profess, and that is that we are all endowed with a free will and a responsibility to answer for our actions. And that women should have that opportunity to exercise their free will.

Is it difficult for you to reconcile your faith with the role you have in public life?

You know, I had five children in six years. The day I brought my fifth baby home, that week my daughter turned 6. So I appreciate and value all that they want to talk about in terms of family and the rest. When I speak to my archbishop in San Francisco and his role is to try to change my mind on the subject, well then he is exercising his pastoral duty to me as one of his flock. When they call me on the phone here to talk about, or come to see me about an issue, that’s a different story. Then they are advocates, and I am a public official, and I have a different responsibility.

Fr. John Zuhlsdorf applies the necessary fisking and muses: “I cannot fathom why she hasn’t been told she must not receive Holy Communion. How much more public scandal does she have to give before the bishops of the places where she resides take concrete action?”

My thoughts exactly. Note that she has already received an admonishment from the Holy See and an invitation to “converse” from San Francisco Archbishop George H. Niederauer.