On Distributism and the Futility of Third Ways

The search for an economic and political “third way” has haunted intellectuals for over a hundred years in the Western nations. Many forget that fascism was at one time considered a viable “third way” between liberal capitalism and communism, preserving for the most part private ownership of the means of production for profit but subjecting it to near total control and regulation by the state. Many other models would follow, from the local and anarchistic to the national and statist, appearing under many different names.

I too was caught up in the desperate search for a “third way”, as are many Catholics who eventually find their way to Distributism. But it became quite obvious to me that what people who actually defined themselves as libertarians and capitalists were promoting and defending really wasn’t what I had always thought it was, nor was it anything I could possibly find objectionable.

END_OF_DOCUMENT_TOKEN_TO_BE_REPLACED

What Is This Wicked Capitalism?

One of the difficulties that comes in discussing the many “isms” that populate the landscape of political discussion is that very often people use the same words without mean the same things, or indeed without having any clearly defined idea of what they do mean. While this is the case with nearly any ism (socialism, liberalism, libertarianism, conservatism, etc.) I’d like to address in this case the way in which opponents (particularly Christian opponents) of “capitalism” tend to address the object of their condemnation. This is in some ways a beautifully typical example of a Christian opponent of capitalism attempting to describe what it is he is condemning:

We must remember the capitalistic system we live in also is a materialistic ideology which runs contrary to the Christian faith, and it is a system which is used to create rival, and equally erroneous, forms of liberation theology. It is as atheistic as Marxism. It is founded upon a sin, greed. It promises utopia, telling us that if we allow capitalist systems to exist without regulation, everyone, including the poor, will end up being saved. The whole “if we allow the rich to be rich, they will give jobs to the poor” is just as much a failed ideology as Marxist collectivism.

Admittedly, this is a somewhat muddled set of statements, but I think we can draw out of it the following statements which the author, and many other self described critics of capitalism (in particular from a religious perspective) believe to be true:
-Capitalism is a system or ideology much as Communism is.
-Capitalism is based on greed or takes greed to be a virtue.
-Capitalism is a materialistic or atheistic philosophy/system.
-Capitalism could be summed up as the idea that “if we allow the rich to be rich, they will give jobs to the poor”
-Capitalism promises utopia if “capitalist systems” are allowed to exist without regulation.

While one approach to this is simply to throw out the term “capitalism” entirely, what I’d like to do is accept that claim that we live in a “capitalist” system and that this system is roughly what libertarians/conservatives advocate, and proceed to address the claims made about “capitalism” in that context.
END_OF_DOCUMENT_TOKEN_TO_BE_REPLACED

Brad DeLong recently compared the economic performance of communist countries with their capitalist neighbors and found, surprise surprise, that capitalism works a lot better than communism: 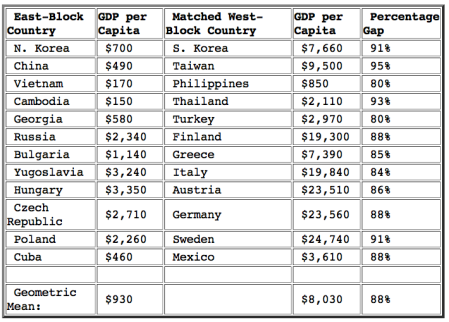 Eschewing markets robs you of between 80% and 90% of your potential economic productivity.

DeLong’s argument is persuasive, but it also seems a bit dated. Outside of a few English departments pretty much everyone recognizes that communism was a flop. Heck, even Fidel Castro admits that it doesn’t work. Today the pressing question is not America vs. the Soviet Union but America vs. the European Union, i.e. the relatively free market system of the United States vs. the relatively more social democratic system of many European countries.

Here is some recent OCED data on median income by country, from the mid 2000S

END_OF_DOCUMENT_TOKEN_TO_BE_REPLACED

Thomas Woods and His Critics, The Austrian vs. Distributist Debate Among Catholics

As a young convert I was very much intrigued by the ongoing discussion between Richard J. Neuhaus, George Weigel, Michael Novak and Fr. Robert Sirico — and their critics, ranging from David Schindler (editor of Communio) to Tracey Rowland and Alisdair MacIntyre. This has sometimes been described as a debate between ‘Catholic neocons’ and ‘Catholic paleocons’; ‘Whig-Thomists’ vs. ‘Augustinian Thomists’ (the latter by Tracey Roland in a famous two-part interview with Zenit).

The discussion was centered on such questions as:

A few years back I read a fascinating book on the history of libertarianism in America called Radicals for Capitalism. Of the many colorful characters in the book, one of my favorites was Joseph Galambos, an astrophysicist-turned-libertarian-guru who took a very stringent view of intellectual property rights. Galambos’ students were forbidden even to mention or paraphrase his ideas with anyone who hadn’t paid for his lecture course (which may help explain why you’ve never heard of him before). One libertarian in the book gives the following humorous account of how a conversation with a Galambosian might go:

“There are five legitimate functions of government,” said the Galambosian.
“No kidding. What are they?”
“I am not at liberty to say. The theory was originated by Andy Galambos and it is his primary property.”
“If the rest of us were free to discuss his ideas,” said the Galambosian, “there is no question in my mind that Galambosianism would spread throughout the whole world like wildfire.”

Galambos also dropped a nickel into a fund box every time he said the word “Liberty,” as a royalty to the descendants of Thomas Paine, who invented the term.

Not to put too fine a point on it, but Galambos was kind of nuts. Yet his views are little more than the logical workings out of the idea that intellectual property is a matter of moral right.

END_OF_DOCUMENT_TOKEN_TO_BE_REPLACED

Science and Technology in World History

Technological history is a unique point of view that always caught my eye.  David Deming of the American Thinker gives us a brief synopsis of his latest contribution in this genre.  Keep in mind how integral Christianity was to the recovery of Europe after the barbarian invasions and the safekeeping of knowledge by the monastic system that allowed Europe to recover and blossom into what we now call Western Civilization:

Both Greece and Rome made significant contributions to Western Civilization.  Greek knowledge was ascendant in philosophy, physics, chemistry, medicine, and mathematics for nearly two thousand years.  The Romans did not have the Greek temperament for philosophy and science, but they had a genius for law and civil administration.  The Romans were also great engineers and builders.  They invented concrete, perfected the arch, and constructed roads and bridges that remain in use today.  But neither the Greeks nor the Romans had much appreciation for technology.  As documented in my book, Science and Technology in World History, Vol. 2, the technological society that transformed the world was conceived by Europeans during the Middle Ages.

Greeks and Romans were notorious in their disdain for technology.  Aristotle noted that to be engaged in the mechanical arts was “illiberal and irksome.”  Seneca infamously characterized invention as something fit only for “the meanest slaves.”  The Roman Emperor Vespasian rejected technological innovation for fear it would lead to unemployment.

Greek and Roman economies were built on slavery.  Strabo described the slave market at Delos as capable of handling the sale of 10,000 slaves a day.  With an abundant supply of manual labor, the Romans had little incentive to develop artificial or mechanical power sources. Technical occupations such as blacksmithing came to be associated with the lower classes.

END_OF_DOCUMENT_TOKEN_TO_BE_REPLACED

Is the Means of Production an Obsolete Idea?

Where a society’s economy is based primarily on agriculture or manufacture, thinking in terms of the means of production makes some sense. In an agricultural economy wealth is based primarily on ownership of land, and in a manufacturing economy ownership of things like factories and machinery plays an analogous role. In a modern service-based economy, by contrast, wealth is based largely on human capital (the possession of knowledge and skills). As Pope John Paul II notes in Centesimus Annus, “[i]n our time, in particular, there exists another form of ownership which is becoming no less important than land: the possession of know-how, technology and skill. The wealth of the industrialized nations is based much more on this kind of ownership than on natural resources.”