In a recent column Washington Post columnist, E J Dionne noted that the Tea Party movement is a great scam. Quite an indictment coming from the self described progressive Catholic who still thinks government can never be big enough and the Church should tell the faithful more about the teachings of the agnostic Saul Alinsky than that of 2,000 year old teachings of the Catholic Church. Dionne has made it his business to comment on all matter of politics and religion for quite some time. His partner in left wing chicanery is New York Times columnist Maureen Dowd who never hesitates to go for the jugular.  Though she says he she comes from humble Washington DC roots, you would never know it by how she mocks those who really came from humble surrounding and never forgot it. She probably grew up with many Sarah Palin’s and Christine O’Donnell’s around her. Yet, I doubt she mocked many to their face as she gleefully does now to the backs of Palin and O’Donnell.

Dionne and Dowd seem to have it backwards, they don’t think citizens should voice their views about the fallacies of liberal Big Government, but they do believe everyone knows better than the divine about religion. This is quite common for liberals who often seem to think they are divine. Dionne and Dowd are part of a movement who thinks they should control government and religion, and those who disagree with them are often labeled as unintelligent; the worst sin as far as liberals are concerned. However, who is the unintelligent one? Big Government has never worked. It has only brought huge debt which has to be repaid by future generations. Individuals who go into debt face a series of tough measures. Yet Dionne and Dowd seem oblivious to this and advocate the same disastrous path for the government, the end result being tough measures for everyone.  In other words Big Government is a disaster that doesn’t work.

Does the Devil Exist?

In the Gospel, we often hear of Jesus expelling demons. Perhaps this fact seems somewhat strange to us because being possessed by a demon seems to us as something exclusive to those times. However, it also happens today even though it may be less frequent.

But the ultimate question for mankind today is…..does the devil exist as a person or not? As it is, modern man and inclusively the modern Christian man hardly even believes in the devil. The devil has been able to succeed today with his best maneuver: to put his existence in doubt. [more] 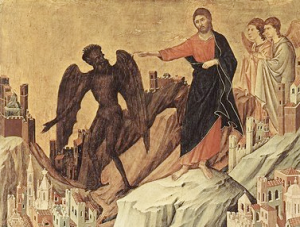 To illustrate the point, Fr. Richard McBrien (National Catholic Reporter) mocks a certain Bishop Thomas Paprocki for announcing a special Conference on the Liturgical and Pastoral Practice of Exorcism, to be held in Baltimore in early November, just before the bishops’ semiannual meeting.

That the conference would focus on “not only the theological and scriptural foundations of the rite of exorcism” but “the necessary, practical insights into the many liturgical, canonical and pastoral issues associated with exorcisms and the church’s battle against the demonic presence in the world” is, to McBrien, a subject of ridicule:

The priest who sent me a copy of this letter wrote across the top, in capital letters, “CAN YOU BELIEVE THIS? IN 2010.”

His question was rhetorical, of course.

Paprocki was recently appointed Bishop of Springfield, IL by Pope Benedict XVI, who has been known to take the existence of the devil — and exorcism — rather seriously himself.

What The Week Long LeBron James Ego Charade Can Tell Us About The State Of the World, As Well As The Catholic Church

UPDATE  Check Back On Monday To See What Time The Scheduled Appearance On The Al Kresta Show Will Take Place. Al Kresta Is Heard On EWTN Radio ( Over 100 Affiliate Stations) Check Your Local Listings Or Click Here To Listen Live

The LeBron James saga was particularly painful for those of us who live in Ohio and are Cavaliers fans. However a cursory glance at some of the national columnist’s reaction, to the week-long ego charade broadcasted by ESPN, gives me hope that many others have seen through this smoke screen as well. (Check these columns here here and  here.) What we witnessed Thursday night and the excuses made for it, along with sucking up by some of the national powers that be, gives us some insight on a world full of instant gratification and the desire to party on in South Beach, rather than roll up their sleeves in places like Cleveland. Talk about a metaphor for the Catholic Church.

For years now many faithful orthodox minded Catholics have painfully watched friends and loved ones leave the Catholic Church for either the local hoopty do mega church (Mother Angelica’s words,) or for no church at all, claiming they needed to feel better. They didn’t like a Church who couldn’t get with the times, had too many sinners in the pulpit, or talked to much about sin and not enough about heaven. Perhaps the LeBron James fiasco has given us the perfect recipe for what we should do; give it right back to them.

I grew in a small town (or city depending upon your classification) full of hard working class folks (and farmers who came into town from the outlying areas) where flowery words were few and far between and one would be easily called out for his actions. Now we all know the Church has had some difficult times in the last few years. However, this is because we wanted to be liked, instead of doing it God’s way, whether that was politically correct or not.

Today we have a new crop of orthodox-minded young seminarians, priests and women religious who are pious, but not above calling people out concerning their phony excuses for not taking their Faith more serious by not practicing it, or leaving it all together. In my book, The Tide is Turning Toward Catholicism, I outline the increase in vocations, especially in dioceses which are more openly orthodox in their approach. The Father McBrien’s and Kung’s of the world are being replaced by younger versions of Father Corapi and Father Pacwa. Though these two priests have different approaches, they are not above calling out the phony reality show world we often seem to celebrate in our culture and religion. END_OF_DOCUMENT_TOKEN_TO_BE_REPLACED

END_OF_DOCUMENT_TOKEN_TO_BE_REPLACED

Following the 2009 Election Results which way is the tide turning toward truth or relativism?

Under the surface, and largely unbeknownst to the mainstream media, the tide has been turning to Catholicism for some time. The pontificates of Pope John Paul II and Pope Benedict XVI along with events such as an increase in orthodox minded seminarians, young priests and young women religious, a return to devotions and a reform of the reform of liturgy have shown us that indeed the tide is turning. However, for some time now western culture has been moving in the opposite direction, where any, whim or opinion that holds that orthodox minded religious thought is antiquated and even harmful is held in high regard. How could this jibe with the turning tide within the Church? Who would win? Didn’t Jesus promise that the gates of hell would not prevail against His Church after He gave Peter the keys (and the 265 subsequent popes) to lead it? The answer is the same answer that has always been, the Church eventually always wins and it will this time as well.

Following the Election of 2008 when liberalism was on the ascendancy, many in the mainstream media joyfully proclaimed a new era, where one could read between the lines and see that traditional views of society, family and religion were on their way out and big government was in. However, a funny thing happened on the way to the revolution, many Americans refused to go to the Bastille with pitchfork in hand. Americans view of revolution was almost always in line with George Washington’s view of limited government and not Maximilien Robespierre’s view of war against society, family and religion. Perhaps the Election of 2008 was a pox on both their big spending houses that was wrongly construed as a vote for Big Government.

END_OF_DOCUMENT_TOKEN_TO_BE_REPLACED

Father Richard McBrien, Professor of Theology at Notre Dame, boy that comes as a shock doesn’t it, doesn’t think much of eucharistic adoration.  McBrien of course has been a fierce defender of the secular zeitgeist for decades, and has done his very best to wean generations of Catholics from anything in the Faith that would not pass muster at fashionable parties in academia.

For myself I love eucharistic adoration.  I never have done it without feeling much closer to God.  Since John Paul II also approved of it in his letter DOMINICAE CENAE, I guess I will just have to bear up under the strain of being thought backward by Professor McBrien.  Father Z gives McBrien his patented fisking here.

You know, tenured dissenters like McBrien have a real problem on their hands in the age of the internet.  It is very easy now for ordinary Catholics to have access to church teaching by a few clicks and read what John Paul II wrote:

“Adoration of Christ in this sacrament of love must also find expression in various forms of eucharistic devotion: personal prayer before the Blessed Sacrament, Hours of Adoration, periods of exposition-short, prolonged and annual (Forty Hours)-eucharistic benediction, eucharistic processions, eucharistic congresses.”

Of course Pope Benedict’s views are well known and are set forth here.  When we have such easy access to the words of Peter, it is much harder for Catholics to be bamboozled by flim-flam artists like McBrien seeking to distort the teaching of the Church in service of their personal agendas.  The modern world provides many challenges to the Church, but I think in the long run the internet may become a great advantage to the magisterium of Holy Mother Church.