I’m on record as not being a member of the Glenn Beck fan club. I don’t like his overly emotive mannerisms, his politics, or his theology. I’d rather the president of my alma mater was more circumspect in praising him, and I’ve written to the university to that effect. At the same time, I’m somewhat fascinated by the accounts of his rally in DC this past weekend. For instance, here is David Weigel (erstwhile Washington Post reporter and Journolist member) reporting on the event:

“It’s about as angry as a Teletubbies episode….The Democrats who pre-butted Beck’s rally by predicting an overtly political hateananny were played for suckers. They didn’t pay attention to Beck’s “Founder Fridays” episodes on Fox, his high-selling speaking tour, or his schmaltzy children’s book The Christmas Sweater. It’s not his blackboard that makes him popular. It’s the total package he sells: membership in a corny, righteous, Mormonism-approved-by-John Hagee cultural family. The anger is what the media focus on, he says, joking several times about what “the press” will do to twist his words.

Beck’s rally ends just as he said it would—without incident, political or otherwise. He’s just taken the world’s most derided TV audience, put them in the National Mall, and presided over the world’s largest megachurch. “Bring out the bagpipes,” he says. Bagpipe players then walk onto his stage, and the sound of “Amazing Grace” fills the mall.

END_OF_DOCUMENT_TOKEN_TO_BE_REPLACED

Rank and File Conservatives & The Conservative Intelligentsia United In Outrage Over Mosque Near Ground Zero, Not So With Same-Sex Marriage

The proposed mosque set to be built near Ground Zero, site of the September 11, 2001 attacks has brought a sweeping condemnation from both rank and file conservatives and the Conservative Intelligentsia. Now that President Barack Obama has weighed in the matter, seemingly supporting the effort, one can only imagine how this will be used in the fall elections. However, a rift has appeared to have been opened concerning the views of the rank and file conservatives and the Conservative Intelligentsia following the ruling of Judge Vaughn Walker over same-sex marriage. Many of the conservative intelligentsia, along with the establishment wing of the Republican Party has either been silent or voiced the view that the wished the whole gay marriage issue would simply go away. This has led to bewilderment from some conservative voices.

The best Catholic tie in with the efforts to build a mosque on Ground Zero came from the famed conservative columnist Charles Krauthammer, who is Jewish. In his opposition to the mosque being built near Ground Zero, he correctly pointed out that Pope John Paul II ordered Carmelite nuns, who were living right next to Auschwitz, to move closer to a nearby town, since the site had become a rallying point for Jewish identity. Krauthammer correctly pointed out that Christians had been murdered there too and the nuns were doing the heroic deed of praying for the souls of those who were viciously murdered. However, Krauthammer pointed out that the late Polish pontiff felt that it created the wrong perception.

END_OF_DOCUMENT_TOKEN_TO_BE_REPLACED 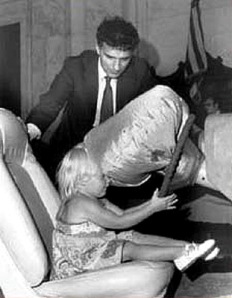 Last night around 2am, in my sleep-deprived state (having a newborn, 2 year-old, 6 and 10 year-olds as well), I was watching C-Span and an interview with Ralph Nader.  I believe I heard him say that he has been attempting to get Sean Hannity, Glenn Beck, or Rush Limbaugh to debate him in a neutral setting. He called them out as “Cowards” for refusing him to this point.  He also called their format/style as that of “Cowardly Silioquy” whereupon they silence any question they don’t like by switching off guest’s mikes.

I think this challenge should be answered- no matter where you stand or who you prefer in this mix, I have to give the man who calls for an honest debate the winner -in my own estimation- until someone steps up and accepts the challenge. It would seem a fair fight given the vocations of all of these men- if someone is going to be a public media figure who specializes in political material- that puts them in a category where they should be able to manage a genuine debate scenario.

END_OF_DOCUMENT_TOKEN_TO_BE_REPLACED

Here are my Top Picks in the Internet from the world of the Catholic Church and secular culture:

1. On ABC’s “This Week” this past Sunday Arianna Huffington, of the Huffington Post accused Glenn Beck of “inciting the American people” to commit violence against Obama by talking about “people being slaughtered.”

END_OF_DOCUMENT_TOKEN_TO_BE_REPLACED

On Glenn Beck & Other Crazy People

I am allergic to political cable tv shows, talk radio, and nightly news. I cannot watch or listen to these programs for longer than fifteen minutes without subjecting anyone within earshot to a lengthy rant. And so I won’t pretend to be deeply familiar with Glenn Beck’s work. Instead, I’ll rely on Joe Carter at First Things:

There isn’t much I could add to the criticisms—from the left, right, and center—that have been made against him in the last few weeks. His recent comments have shown that he’s a naked opportunist who will say anything to get attention: If he’s on his television show on Fox he’ll pander to the audience by saying that President Obama is a racist who is ushering in an age of socialism, if not the apocalypse; then, when he is in front of Katie Couric and CBS News, he says that John McCain would have been worse for the country than Obama (which begs the question, “What exactly is worse than the socialist/communist/fascist apocalypse?”).