Sarah Palin in her speech at the Tea Party Convention mocked President Obama’s use of teleprompters. She herself was however caught with notes written on her left hand. The words “Energy”, “Tax,” and “Lift American Spirits” are clearly visible. There also appears to be the phrase “Budget Cuts” with the word “budget” crossed out.

To be clear, these notes were not for her speech, for which she used prepared remarks, but for the Q&A session that followed afterward, during which she glanced at her hand. Inevitably one must ask, how is this not worse?

Nothing in her hand is specific, but rather just general concepts of things that she supports as a political conservative. This same woman on “FOX News Sunday” declared she won’t “close the door” on a presidential bid in 2012.

Put another way: the leading contender, according to a recent poll, for the GOP nomination in 2012 cannot remember her own core principles as a conservative and must employ a cheat-sheet when asked about her beliefs.

In all honesty, I would vote for copy toner before I would ever think of voting for this woman.

You Can’t Buy This Type Of Bad Publicity! 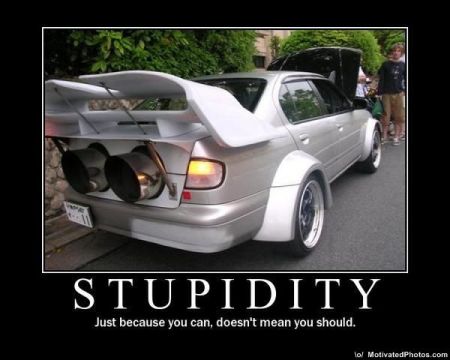 The administration of Ave Maria, I assume in an attempt to draw huge public attention to a critic, has banned blogger Marielena Montesino de Stuart from most of the campus.

Two days after she asked questions at a town government meeting, Marielena Montesino de Stuart was told by a university spokesman she was not allowed on university property or to attend a press conference announcing a $4 million donation from New York billionaire Tom Golisano. When she tried to go anyway, the university had Collier County Sheriff’s deputies waiting to say that they would arrest her if she persisted. END_OF_DOCUMENT_TOKEN_TO_BE_REPLACED

Clinton and Our Lady

Our Secretary of State, pictured above in her school days when she must have been busily not paying attention in at least some of her classes, visited the Basilica of Our Lady of Guadalupe On Thursday March 27.  After observing the image of Our Lady, Clinton inquired who painted it?  She then told a group of Mexicans outside that they had a “marvelous virgin”.  I must say that I am proud to have such a sophisticated, intelligent  and well read person as Mrs. Clinton representing the U.S. abroad.  I trust that she will not forget the “Montezuma’s Revenge” reference on a future trip to Mexico.  Paying “homage” to Our Lady was squeezed in on her way to accepting the Margarent Sanger award Thursday night in Houston from Murder Inc., aka, Planned Parenthood.

Update I:  “Reproductive rights and the umbrella issue of women’s rights and empowerment will be a key to the foreign policy of this administration,” Clinton said in Houston, where she received the Margaret Sanger Award from the Planned Parenthood Federation of America. “

Update II:  Ed Morrissey notes at Hot Air that Clinton said that she had been at the Basilica 30 years before.  Hopefully she was paying more attention this time.