What The Week Long LeBron James Ego Charade Can Tell Us About The State Of the World, As Well As The Catholic Church

UPDATE  Check Back On Monday To See What Time The Scheduled Appearance On The Al Kresta Show Will Take Place. Al Kresta Is Heard On EWTN Radio ( Over 100 Affiliate Stations) Check Your Local Listings Or Click Here To Listen Live

The LeBron James saga was particularly painful for those of us who live in Ohio and are Cavaliers fans. However a cursory glance at some of the national columnist’s reaction, to the week-long ego charade broadcasted by ESPN, gives me hope that many others have seen through this smoke screen as well. (Check these columns here here and  here.) What we witnessed Thursday night and the excuses made for it, along with sucking up by some of the national powers that be, gives us some insight on a world full of instant gratification and the desire to party on in South Beach, rather than roll up their sleeves in places like Cleveland. Talk about a metaphor for the Catholic Church.

For years now many faithful orthodox minded Catholics have painfully watched friends and loved ones leave the Catholic Church for either the local hoopty do mega church (Mother Angelica’s words,) or for no church at all, claiming they needed to feel better. They didn’t like a Church who couldn’t get with the times, had too many sinners in the pulpit, or talked to much about sin and not enough about heaven. Perhaps the LeBron James fiasco has given us the perfect recipe for what we should do; give it right back to them.

I grew in a small town (or city depending upon your classification) full of hard working class folks (and farmers who came into town from the outlying areas) where flowery words were few and far between and one would be easily called out for his actions. Now we all know the Church has had some difficult times in the last few years. However, this is because we wanted to be liked, instead of doing it God’s way, whether that was politically correct or not.

Today we have a new crop of orthodox-minded young seminarians, priests and women religious who are pious, but not above calling people out concerning their phony excuses for not taking their Faith more serious by not practicing it, or leaving it all together. In my book, The Tide is Turning Toward Catholicism, I outline the increase in vocations, especially in dioceses which are more openly orthodox in their approach. The Father McBrien’s and Kung’s of the world are being replaced by younger versions of Father Corapi and Father Pacwa. Though these two priests have different approaches, they are not above calling out the phony reality show world we often seem to celebrate in our culture and religion. END_OF_DOCUMENT_TOKEN_TO_BE_REPLACED 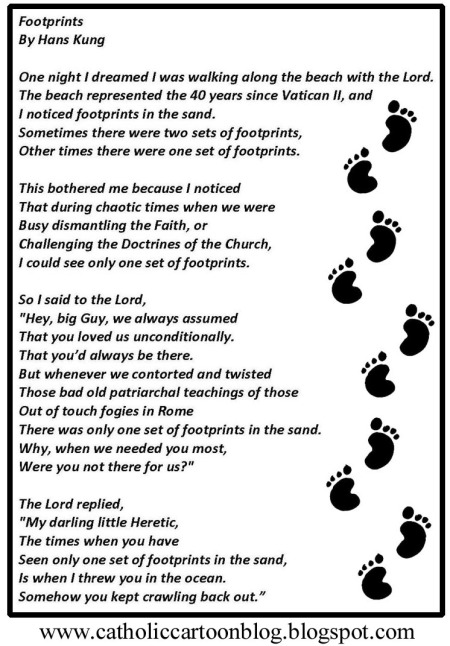 From the brilliant Paul Nichols at Catholic Cartoon Blog.  Hattip to my friend Paul Zummo, the Cranky Conservative.

If You Want The Political Left To Run Governments, Look At What The Religious Left Has Done To Religion (Left It In Tatters)

There is a undercurrent in American society that somehow believes that if the mafia ran things, the country would be better off. There was one city (Newark, New Jersey) where the mafia once controlled much of the city. When their grip on power was done, the city was in tatters. The same could be said for liberals running religion.

END_OF_DOCUMENT_TOKEN_TO_BE_REPLACED

The Construct of Rebellion

In 2010 the Catholic Church in particular and Christianity in general are under attack because age old truths are being abandoned for the Dictatorship of Relativism. One might ask; how did we get here? It didn’t happen overnight; as a matter of fact many of those doing the rebelling actually think they are doing us all a favor.  Centuries and millennium evolved into a construct of rebellion where self appointed leaders who thought knew better than the Church and society itself tried to change all that was sacred and holy into something, they but most importantly their friends in the intelligentsia, could accept. Too many cooks in the kitchen can be bad for your acquired culinary tastes, but when truth is watered down it is something entirely different and far more serious. In this instance, we are talking about souls, not taste buds.  If this is so then how could the thesis of my book, The Tide is Turning Toward Catholicism be true? The answer is simple because the world is getting closer and closer to the precipice. Some may chose to jump but thankfully more will chose to come back from ledge into the world of reality and when they do they will see the many positive developments happening in the Church. One’s own mortality has a way of causing self preservation.

END_OF_DOCUMENT_TOKEN_TO_BE_REPLACED

The Catholic Church has always had a bull’s-eye attached to it, and in truth many of us wouldn’t want it any other way, for when we are almost universally loved, as has happened a few times in the last 40 years we have become “of the world,” instead of suffering for the world.”  Lately, during the pontificates of Pope John Paul II and now Pope Benedict XVI dark forces have gathered at the gates of truth attacking the Church for a variety of long held beliefs.  These beliefs can range from the theological to the social. However, following the US Election of 2008 a tidal wave seems to have inundated the Church from the mainstream media, the political realm and even the entertainment world. The Church’s 2,000 year old teachings and beliefs have been attacked in the United States and Western Europe from elected officials, the mainstream media and well known entertainment celebrities. Some of the faithful have become discouraged and questioned me as to how the thesis of my book, The Tide is Turning Toward Catholicism, could possibly be true in light of this news.

The truth of the matter is that against this troubling backdrop the Church continues to grow around the world, especially in African and Asia but even in North America, where much of the onslaught against the Church has emanated. Seminaries and Mother Houses often have no room for those pursuing a vocation and those young African and Asian men and women are often sent to the US or Europe to explore their vocation. Even in the US and pockets of Europe seminaries are experiencing a mini boom. One seminary rector told me that in the 40+ plus years of being affiliated with the Church, he has never seen a longer sustained period of top notch orthodox minded young men coming in and being ordained as he has seen in the last 10 years. Perhaps this is why the powers that be are so angry.

It seemed the US midterm Election of 2006 emboldened the cause of those militant liberals and secularists who have contempt for much of what orthodox minded Catholicism holds dear. Following the results of the Election of 2008, many pundits proclaimed the results as a sea change for America. Agnostics and atheists gleefully announced that a world where religion and especially conservative or orthodox minded Catholicism held sway was being replaced by a humanist brand of religion where age old teachings were replaced by the ideas of “enlightened” religious leaders, agnostic thinkers, and pop culture celebrities. It seemed this new brand of liberal thinker was less idealistic than their 1960s peers and displayed an anger and hostility that was a far cry from the utopian idealism displayed some 40 years ago. Yet, beneath the surface and below the radar screens of many news organizations, lies the hope of the Catholic faithful who hold on to the ideas  imparted by Christ, His Apostles, Popes, Bishops, Priests, Women Religious, Saints and holy laymen and laywomen throughout the centuries. END_OF_DOCUMENT_TOKEN_TO_BE_REPLACED

Following the 2009 Election Results which way is the tide turning toward truth or relativism?

Under the surface, and largely unbeknownst to the mainstream media, the tide has been turning to Catholicism for some time. The pontificates of Pope John Paul II and Pope Benedict XVI along with events such as an increase in orthodox minded seminarians, young priests and young women religious, a return to devotions and a reform of the reform of liturgy have shown us that indeed the tide is turning. However, for some time now western culture has been moving in the opposite direction, where any, whim or opinion that holds that orthodox minded religious thought is antiquated and even harmful is held in high regard. How could this jibe with the turning tide within the Church? Who would win? Didn’t Jesus promise that the gates of hell would not prevail against His Church after He gave Peter the keys (and the 265 subsequent popes) to lead it? The answer is the same answer that has always been, the Church eventually always wins and it will this time as well.

Following the Election of 2008 when liberalism was on the ascendancy, many in the mainstream media joyfully proclaimed a new era, where one could read between the lines and see that traditional views of society, family and religion were on their way out and big government was in. However, a funny thing happened on the way to the revolution, many Americans refused to go to the Bastille with pitchfork in hand. Americans view of revolution was almost always in line with George Washington’s view of limited government and not Maximilien Robespierre’s view of war against society, family and religion. Perhaps the Election of 2008 was a pox on both their big spending houses that was wrongly construed as a vote for Big Government.

END_OF_DOCUMENT_TOKEN_TO_BE_REPLACED

Much to the Chagrin of the Powers that be, the Tide is Further Turning Toward Catholicism Thanks to Traditional Minded Anglicans

The dream of orthodox minded Catholics and Anglican liberals came true on Tuesday, October 20, 2009 as the Vatican announced that traditional minded Anglicans, clergy included, would be welcomed into the Catholic Church with their own Anglican style rite (though not exactly a rite of their own.) The promise Jesus made that the Gates of Hell would not prevail against His Church is now once again being made manifest for those who chose to recognize it (Matthew 16:16-20.) What King Henry VIII started Pope John Paul II and Pope Benedict XVI have salvaged. The English and their former empire (if they wish) can return home again.

Since many conservatives may now leave, religious liberals too have high hopes as the worldwide Anglican Communion can possibly fulfill their wish of unbridled liberalism. However, it is becoming plain to see that it is for all intents and purposes the liberal’s wish is now turning into a death wish.  The irony of reading statements by traditional Anglicans thanking God for Pope Benedict’s statement coupled by liberal Catholic posters in the dissident National Catholic Reporter asking to be saved from Rome spoke volumes. Even with fawning mainstream media coverage, every liberal Protestant denomination has seen their numbers plummet in recent years, some as much as 50%, while Catholicism, with all the negative banner headlines, continues to grow around the world.

The Archbishop of Canterbury seems a truly tragic figure cut from a Shakespearean play trying to hold together what a murderous king wrought. It couldn’t be done and so we may now see the implosion of the Anglican Communion, especially in the only region that had any vibrancy, Africa. The African and Asian continents have long been the hope of the One True Church. Fortunately, the embers of truth can also be seen in North & South American seminaries and even in Europe, where the Faith had seemed all but dead.