Nicholas D. Kristof wrote another New York Times editorial condemning the Church. It’s not worth reading; it’s the same stuff about the Vatican is not the Church, but the real Church are the ones helping the needy (i.e. the ones doing what Kristof likes-except for obviously Mother Teresa b/c she didn’t like contraception) and the Church needs to expand its ideas on women and contraception in order to avoid the sex abuse crisis. For example

That story comes to mind as the Vatican wrestles with the consequences of a patriarchal premodern mind-set: scandal, cover-up and the clumsiest self-defense since Watergate. That’s what happens with old boys’ clubs

That’s not interesting. We’ve heard it before. What is interesting is his blog. He himself comments on the article.

One question that I’m still puzzling over is this: how much difference would it make if the Vatican did admit women as deacons, or ordain them? It’s certainly true that women can be abusers as well as men. The painful report of the Irish Commission of Inquiry last year made that clear, with accounts of nuns brutally mistreating children and in some cases raping them. Likewise, ordination of women is no guarantee of popular support: mainline Christian denominations have been ordaining women, and still losing ground to more conservative Evangelical denominations.

END_OF_DOCUMENT_TOKEN_TO_BE_REPLACED

NBC has apologized (the linked story had absolutely nothing to do with the headline, or with the pope, for that matter).

Really? Will heads roll, too? They should, but I doubt they will.

Our German Shepherd Under Attack 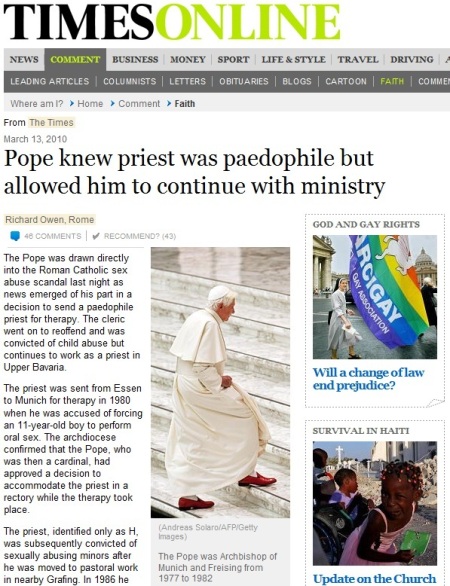 The mainstream media and even some conservative sites such as Lucianne are spreading defamatory statements that are misleading and false about Pope Benedict XVI.

What started this brouhaha?

Richard Owen of the newspaper site called the Times of London.

The headline reads “Pope knew priest was paedophile but allowed him to continue with ministry“.

The article then states otherwise, but if Richard Owen didn’t write the headline to his story, he should request it to be changed immediately.  It is apparent that someone at the Times hates the Church and is pushing their anti-Catholic agenda with this misleading headline.

It doesn’t help that a self-identified expert on Catholicism, blogger Ruth Gledhill, adds insult to injury with an off-base column blasting of the hierarchy and structure of Holy Mother Church:

The Pope is pretty unassailable. He is not elected, he is a monarch, and the centralisation that has taken place under the last two Popes has cemented that power. Pope Benedict XVI has also indicated in his three encyclicals the depths of his own integrity and intellectual rigour.

How much knowledge on the Catholic Church does one need to be called an “expert” on it?  How to spell ‘Catholic’?

END_OF_DOCUMENT_TOKEN_TO_BE_REPLACED

Sarah Palin and Bristol Palin respond to the vile Family Guy attack on Trig, her son with Down’s Syndrome:

People are asking me to comment on yesterday’s Fox show that felt like another kick in the gut. Bristol was one who asked what I thought of the show that mocked her baby brother, Trig (and/or others with special needs), in an episode yesterday. Instead of answering, I asked her what she thought. Here is her conscientious reply, which is a much more restrained and gracious statement than I want to make about an issue that begs the question, “when is enough, enough?”:

“When you’re the son or daughter of a public figure, you have to develop thick skin. My siblings and I all have that, but insults directed at our youngest brother hurt too much for us to remain silent. People with special needs face challenges that many of us will never confront, and yet they are some of the kindest and most loving people you’ll ever meet. Their lives are difficult enough as it is, so why would anyone want to make their lives more difficult by mocking them? As a culture, shouldn’t we be more compassionate to innocent people – especially those who are less fortunate? Shouldn’t we be willing to say that some things just are not funny? Are there any limits to what some people will do or say in regards to my little brother or others in the special needs community? If the writers of a particularly pathetic cartoon show thought they were being clever in mocking my brother and my family yesterday, they failed. All they proved is that they’re heartless jerks. – Bristol Palin”

Perhaps it is partially because I have an autistic son, but words literally fail me to adequately describe people evil enough to mock a handicapped child because they differ with the mother of the child politically. 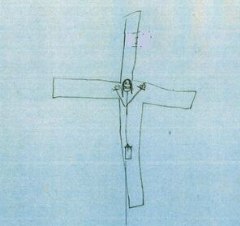 END_OF_DOCUMENT_TOKEN_TO_BE_REPLACED

I’ve never had much use for Jimmy Carter.  I view him as in the running with James Buchanan for the title of worst President of the United States, and he has always struck me as a mean and spiteful little man.  Now he adds the title of bigot to his list of dishonors.  In an address to the World Parliament of Religions (You know that has to give God a good laugh!)  the Solon of Plains is reported to have unloaded on both Southern Baptists and Catholics.

In opposition to the vast majority of authentic scholars and historians, Carter asserted: “It’s clear that during the early Christian era women served as deacons, priests, bishops, apostles, teachers and prophets.”  He added: “It wasn’t until the 4th century or the 3rd at the earliest that dominant Christian leaders, all men, twisted and distorted Holy Scriptures to perpetuate their ascendant position within the religious hierarchy.”

Contrary to the theorizing of Carter, Pope John Paul II taught, “The Lord Jesus chose men to form the college of the twelve apostles, and the apostles did the same when they chose collaborators to succeed them in their ministry.”  He added: “the Church recognizes herself to be bound by this choice made by the Lord himself.  For this reason the ordination of women is not possible.” (Catechism of the Catholic Church; 1577)

Carter singled out the Southern Baptist Convention and Roman Catholic Church, claiming that they “view that the Almighty considers women to be inferior to men.”  However, both Christian faiths hold to the Scriptural truth that God created men and women equal.

Carter suggests that only in permitting women to become priests and pastors could male religious leaders choose to interpret teachings to exalt rather than subjugate women.  “They have, for their own selfish ends, overwhelmingly chosen the latter, subjugation,” he said.

“Their continuing choice provides a foundation or justification for much of the pervasive persecution and abuse of women throughout the world,” said Carter. Carter goes on to list horrific violations against women such as rape, genital mutilation, abortion of female embryos and spousal battery.