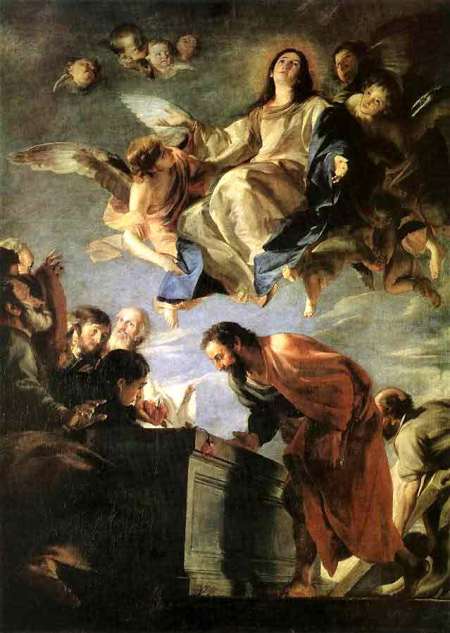 END_OF_DOCUMENT_TOKEN_TO_BE_REPLACED

Throughout the last few years and specifically the last decade or so, the voluminous number of kooky quotes and statements coming from religious believers (heterodox Catholics included) and non believers alike is mind boggling. It can’t but help push the reasonable minded into the Catholic Church. Most casual observers are familiar with the number of high profile converts and reverts to the Catholic Church in the last 25 years or so. They range from theological luminaries like Dr Scott Hahn and Dr Francis Beckwith to political figures like Deal Hudson, Laura Ingraham and former Speaker of the House Newt Gingrich. Many like them have come to the Church after years of study and reason, but many also have come to the Church after years of seeing their particular religious denomination become unrecognizable.

The latest world calamity has given us two examples of sheer kookery coming from a religious leader and a secular voice. After the horrific earthquake that left the western world’s most impoverished nation in tatters, the Reverend Pat Robertson chimed in with a quote that was not only tragically insensitive but historically inaccurate. The onetime presidential candidate (who actually came in second in the 1988 GOP Iowa Caucus) and a leading voice of the Evangelical world blamed the earthquake on Voodoo, a cult that sadly far too many people practice in Haiti.  Robertson voiced his opinion on his popular 700 Club television program. Robertson repeated the fundamentalist canard that in the early 1800s the leaders of a slave revolt fighting against French colonial forces forged a pact with the Satan to thrown off the chains of their oppressors.

END_OF_DOCUMENT_TOKEN_TO_BE_REPLACED

The twenty-fifth day of December.

In the five thousand one hundred and ninety-ninth year of the creation of the world from the time when God in the beginning created the heavens and the earth;

the two thousand nine hundred and fifty-seventh year after the flood;

the two thousand and fifteenth year from the birth of Abraham;

the one thousand five hundred and tenth year from Moses
and the going forth of the people of Israel from Egypt;

the one thousand and thirty-second year from David’s being anointed king;

in the sixty-fifth week according to the prophecy of Daniel;

in the one hundred and ninety-fourth Olympiad;

the seven hundred and fifty-second year from the foundation of the city of Rome;

the forty second year of the reign of Octavian Augustus;

the whole world being at peace,

in the sixth age of the world,

Jesus Christ the eternal God and Son of the eternal Father,
desiring to sanctify the world by his most merciful coming,
being conceived by the Holy Spirit, and nine months having passed since his conception, was born in Bethlehem of Judea of the Virgin Mary, being made flesh.

Daniel Cardinal DiNardo, the Archbishop of Galveston-Houston, was the chief celebrant at the annual Red Mass

yesterday at the Cathedral of Saint Matthew the Apostle.

The Red Mass is celebrated annually at the Washington, D.C. Cathedral and hosted by the John Carroll Society, a group of Washington area legal professionals.  The Mass is normally for for judges, attorneys, law school professors, students, and government officials.  The Mass requests guidance from the Holy Ghost for all who seek justice, and offers the opportunity to reflect on what Catholics believe is the God-given power and responsibility of all in the legal profession.

The Red Mass is so-called from the red vestments traditionally worn in symbolism of the tongues of fire that descended on the Apostles.  The most significant difference between the Red Mass and a traditional Mass is that the focuses of prayer and blessings concentrate on the leadership roles of those present.  Guidance from the Holy Ghost is asked to be bestowed on the congregants. Other blessings that are commonly requested to prevail in the minds, offices, and court rooms are Divine strength, wisdom, truth, and justice.

END_OF_DOCUMENT_TOKEN_TO_BE_REPLACED

Here is an announcement I wrote for my Facebook Cause “Dads Protecting Daughters”):

In creating this cause (Dads Protecting Daughters) to protect my daughters (and son), I thought of it as primarily addressing the threats from the outside- the political/cultural/economic ones. But recently I had a skin cancer scare (should be ok- surgery is June 17 appreciate your prayers).

END_OF_DOCUMENT_TOKEN_TO_BE_REPLACED

Women Priests in the Catholic Church?

On the Ordination of Women, Pt. I

The Catholic Church in the modern world has faced numerous petitions to alter her doctrine in regard to several theological and moral matters. The ordination of women is amongst such petitions, particularly after the Second Vatican Council. Several Protestant religious traditions have authorized women ministers and preachers. Many churches in the Anglican Communion already permit women to serve at the altar. The Catholic Church is virtually alone, with the sole exception of the Eastern Orthodox, in her commitment to an exclusively male priesthood. Despite these realities, the late Holy Father, Pope John Paul II solemnly declared in his apostolic letter Ordinatio Sacerdotalis “…the Church has no authority whatsoever to confer priestly ordination on women and that this judgment is to be definitively held by all the Church’s faithful.” Despite the Holy Father’s attempt to reaffirm the Church’s tradition of male-only priests, the question, at least in debate, still remains. Despite the sincerity of advocates for conferring the sacrament of ministerial priesthood on women, theologically and doctrinally it is impossible. Cardinal Ratzinger (Pope Benedict XVI) too has reiterated that the church teaching regarding women’s ordination is “founded on the written Word of God, and from the beginning constantly preserved and applied in the Tradition of the Church, it has been set forth infallibly by the ordinary and universal Magisterium.”