The Catholic Left: The Real Home of Calvinism 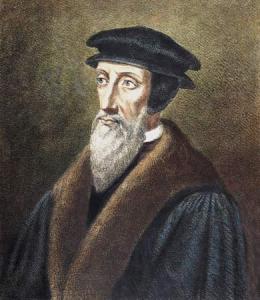 We here at The American Catholic, along with conservative Catholics in general, have been accused many times of “Calvinism” by certain writers at Vox Nova. I am going to go out on a limb and suggest that this accusation is nothing more than a massive projection made by people who harbor Calvinist theological assumptions themselves, of which they may or may not be fully aware. Particularly, I think in their constant shilling for big government programs, for slavishness before all forms of authority, for the unlimited extension of “rights” (i.e. entitlements), and the rest of the statist agenda, the leftists at Vox Nova and throughout American political landscape have absorbed a perverse Calvinist doctrine of their own, namely that of the total depravity of man.

I have actually written about this before: the process by which radical leftism transformed from a project rooted in optimism, in a fanatical belief in man’s goodness and reason (apart from God of course), to one of utter pessimism and misanthropy. The first communists, and particularly Marx – for all of their deep flaws, errors, and hatreds – retained a belief in man’s goodness that they had mistakenly come to believe Christianity had rejected through the heresies of the Protestant rebellion.

END_OF_DOCUMENT_TOKEN_TO_BE_REPLACED

Marian apparitions have always been a sign of God’s love. It truly is one of His greatest graces, which physically shows us the Blessed Mother along with her love, words of encouragement and warnings about the world in which we live. Sometimes the Church Militant heeds her call, but sadly often it doesn’t. This article will only cover a handful of Church approved apparitions (this can be a little tricky, more on this later,) but what it will show is that often the Blessed Mother appears in lands that have experienced great suffering with often more suffering to follow. Her message to bring the world closer to her Son and live according to Jesus’ teachings is one of God’s greatest graces, something that is often met with violent, evil attacks. The miraculous events surrounding her appearances often take place in the presense of great vistas; a window of sorts into God’s loving handiwork. The said could be said about Jesus at The Transfiguration and the Sermon on the Mount.

Something to keep in mind before we begin; during the early days of the Church investigative bodies were the last thing the Church was worried about at a time when the Church was trying to literally stay alive during an array of persecutions. Following the Protestant Reformation, a more detailed structure emerged for investigating appartions. They often took a long time to investigate in order to prevent any hoaxes. Most reported modern day apparitions are not approved. In the 20th Century only 8 of the 300+ reported apparitions were approved. This link from the University of Dayton, a Marianist institution, which houses the largest collection of Marian Apparitions, might be a helpful.

The year was 1300. Though parts of Spain remained under Islamic control, a liberated area, near the Guadalupe River would reveal an amazing find. A cow herder named Gil Cordero would be told by the Blessed Mother to dig, and there he would find holy treasure. Though laughed at by his fellow villagers, his faithful dig yielded a secret burial vault that would house many relics including that of a lifelike carving of the Blessed Mother. It was said to be carved by St Luke and transported to Spain in the sixth century by Bishop Leander, a relative of Pope Gregory the Great.

The vault had been placed there as Islamic armies were making their way to Spain.  The lifelike carving, which still exists today, was said to have been processed through the streets of Rome around the year 590 AD, at the direction of Pope Gregory the Great. He had been given the famous carving while he was Papal Legate in Constantinople.

The famous pontiff had ordered this procession during a terrible plague and famine that had engulfed the city, some one hundred and fifty years after the Roman Empire had collapsed.  As the procession ended, the assembled crowd saw the Archangel St Michael sheathing his sword, signifying that the famine and plague were over. (One can still see the statue of the Archangel St Michael atop the Castel Sant Angelo which commemorates this momentous event.)  The carved statue of the Blessed Mother was then sent to Spain where it remains today, seemingly unscathed after spending years underground during the Muslim conquest.

Years later a young Italian navigator named Christopher Columbus would come to pray at this now famous shrine. He was at the end of his financial rope in seeking backing for a “new way to India.” Soon after his prayer, he was granted an audience with King Ferdinand and Queen Isabella and the rest is history. Few know about this religious side of Columbus. Even fewer know that when he first caught sight of what would be known as the Americas, he had minutes before ordered his crew to pray the Rosary. In gratitude, he named one of the islands he discovered for the site at which his prayers were answered back in Spain, the isle now known as Guadeloupe. END_OF_DOCUMENT_TOKEN_TO_BE_REPLACED

Some 500 Years Ago Like An Abduction In the Night, The Virgin Mary Was Taken From Many Christians

For many Christians today, the thought that the leaders of the Protestant Reformation believed in the Immaculate Conception of Mary or her bodily Assumption into heaven would seem ludicrous, even more bewildering would be the devotions many of the Reformation’s leaders had for the Blessed Mother. Believe or not it, they did. In this month of December when Catholics celebrate three feast day’s commemorating the Mother of our Lord, perhaps it is time to remind our separated brethren of the truths their founder’s believed.

Sometime ago when I was writing my book, The Tide is Turning Toward  Catholicism,  I showed a friend of mine, who is an Evangelical, a homily about the Virgin Mary delivered in the 1500s. I asked him who gave that homily, “probably some pope,” he exclaimed. No, I said it was Martin Luther. He replied, “Dave I trust in almost everything you say, but I am going to have to call you out on this one. I mean isn’t that what the Reformation was all about, ending superstitions like those about Mary?” His mouth dropped when I showed him the passages. I am sure many of today’s Evangelicals, especially of the Calvinist lineage, would have the same reaction.