Why I Am Voting Anti-Democrat Come November 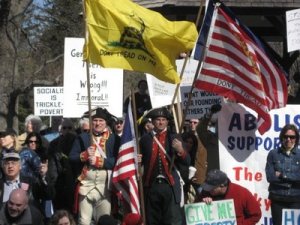 With the political storm clouds gathering over the horizon for November, I want to take this opportunity to explain why I will be voting for GOP candidates (specifically Tea Party candidates when possible) at the midterm elections. It is not because I “believe in” the Republicans, or because I think that a Republican Congress is going to lead America into a new golden age. It is because the Obama/Democrat agenda must be slowed down, and more importantly, because I do not share the hierarchy of priorities or values of the left.

END_OF_DOCUMENT_TOKEN_TO_BE_REPLACED

The Catholic Left: The Real Home of Calvinism

We here at The American Catholic, along with conservative Catholics in general, have been accused many times of “Calvinism” by certain writers at Vox Nova. I am going to go out on a limb and suggest that this accusation is nothing more than a massive projection made by people who harbor Calvinist theological assumptions themselves, of which they may or may not be fully aware. Particularly, I think in their constant shilling for big government programs, for slavishness before all forms of authority, for the unlimited extension of “rights” (i.e. entitlements), and the rest of the statist agenda, the leftists at Vox Nova and throughout American political landscape have absorbed a perverse Calvinist doctrine of their own, namely that of the total depravity of man.

I have actually written about this before: the process by which radical leftism transformed from a project rooted in optimism, in a fanatical belief in man’s goodness and reason (apart from God of course), to one of utter pessimism and misanthropy. The first communists, and particularly Marx – for all of their deep flaws, errors, and hatreds – retained a belief in man’s goodness that they had mistakenly come to believe Christianity had rejected through the heresies of the Protestant rebellion.

END_OF_DOCUMENT_TOKEN_TO_BE_REPLACED

My second favorite living historian, Michael Burleigh, who has written stunningly original works on subjects as diverse as Nazi Germany, religion and politics in the last two centuries,  terrorism, and morality and World War II,  has taken up the cudgels against the despicable attitude of many Brits of the chattering classes regarding the visit of the Pope to the Island next to Ireland.

Under normal circumstances, one might say “welcome” rather than “receive”. But the multiple sexual scandals that have afflicted parts of the Catholic Church have created a window of opportunity for sundry chasers of limelight – including human rights militants, crusading gays, Islamist fanatics, and celebrity God-botherers – to band together to “arrest” the Pope under laws so obscure that few knew they existed. Because child abuse is involved, rather than the more widespread phenomenon of homosexual predation on young men, these manifestations will receive much media attention, especially from the BBC, to the guaranteed perplexity of a less involved general public in a nominally Protestant country. It will require some effort of mind to tune out this noise to hear what the Pope will be saying.

END_OF_DOCUMENT_TOKEN_TO_BE_REPLACED

Yesterday, June 4, was the twenty-first anniversary of the brutal suppression of the pro-Democracy protests in Tiananmen Square in Beijing.  Over 3000 of the protestors were murdered by the Communist government of China.  Tyranny won that round, but I have absolutely no doubt that Democracy will ultimately prevail in the Middle Kingdom.  When it does, the heroes and heroines of Tiananmen Square will be remembered and their murderers forgotten.

“The bravest are surely those who have the clearest vision of what is before them, glory and danger alike, and yet notwithstanding, go out to meet it.” 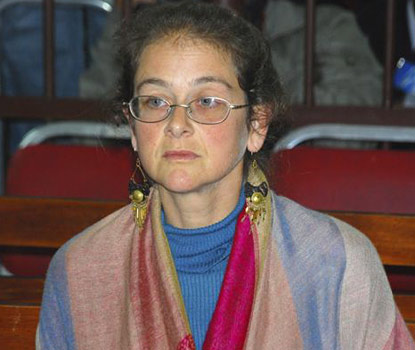 Marxist activist Lori Berenson was convicted in 1995 for her acts of terrorism with the Tupac Amaru Revolutionary Movement (MRTA) in Peru.  She was set free on parole where she must finish her remaining five years in Lima without leaving the country.

She served 15 years and was granted parole today.  Lori Berenson probably benefited from the weight of the American government in reducing the original lifetime sentence to 20 years back in 2005.

MRTA was a Communist rebel group that looked to impose a totalitarian form of government in Peru through terrorist activities.  They’re most famous for their takeover of the Japanese embassy in Lima in 1997.

Over 70,000 Peruvians were victims of Marxist and Communist terrorist activities throughout the 1980s and 1990s.

END_OF_DOCUMENT_TOKEN_TO_BE_REPLACED

Is the Means of Production an Obsolete Idea?

Where a society’s economy is based primarily on agriculture or manufacture, thinking in terms of the means of production makes some sense. In an agricultural economy wealth is based primarily on ownership of land, and in a manufacturing economy ownership of things like factories and machinery plays an analogous role. In a modern service-based economy, by contrast, wealth is based largely on human capital (the possession of knowledge and skills). As Pope John Paul II notes in Centesimus Annus, “[i]n our time, in particular, there exists another form of ownership which is becoming no less important than land: the possession of know-how, technology and skill. The wealth of the industrialized nations is based much more on this kind of ownership than on natural resources.”

END_OF_DOCUMENT_TOKEN_TO_BE_REPLACED

Is there such a thing as a “social sin”? It is out of a respect for my friend Brendan/Darwin that I want to examine and critique his rejection of the idea of social sin, with which I partially agree, but which I believe also leaves out some crucial facts. This is not a point against Brendan/Darwin, since I don’t believe he intended his post to be a treatise on the issue. It is rather a point in his favor, since his general considerations give us the opportunity to explore the question in greater detail.

It must be said at the outset that there are obviously different things that one might mean by “social sin.” Brendan/Darwin begins his argument with the observation that there are those who become “frustrated” with the emphasis many Christians place on individual failings to the neglect of “social or political sin.” There is a significant difference, however, between social and political behavior. My intention is not to split-hairs in order to undermine a valid point (which it is), but rather to highlight the extent to which society and the body politic have become indistinguishable from one another. In my recent essay on the social effects of abortion, I make a distinction between organic and artificial social bonds; the former are those that necessarily follow from man’s social nature, while the latter are those created through politics, i.e. laws. Because we are imperfect and often malicious beings, some artificial authority will always be required for men to attain “the highest good.” But human laws are not foundational – they are supplemental to natural and divine laws, or at least they were in most places in the Western world until the 19th century.

END_OF_DOCUMENT_TOKEN_TO_BE_REPLACED

How God Saved My Soul Through Music

I was inspired to transfer my brain goo to the computer screen over the last couple of hours. Here are the results.  Here’s to a more fruitful discussion.

I haven’t talked extensively about why I rejected atheistic communism and made my way back to Catholicism. There were a number of reasons; being shown the logical and moral bankruptcy of materialism, the corruption I personally witnessed in the movement, the fact that I could never bring myself to really embrace any of the tenants of the cultural agenda, and so on. The idea of fighting for anything in a universe that did not, and could not care about the outcome of human events could no longer captivate me. I suppose some people are able to convince themselves of the possibility, even the certainty, of “goodness” in a reality that owes nothing to consciousness and will; to me, such a belief, no matter how comforting, would be a lie. And I cannot live a lie.

END_OF_DOCUMENT_TOKEN_TO_BE_REPLACED

As he has on other occasions, Pope Benedict last Saturday cautioned a group of Brazilian bishops about the dangers of Marxist Liberation Theology and the grave consequences for ecclesiastical communities which embrace it.   The Pope noted that it has been 25 years since the issuance of Libertatis Nuntius which highlighted the dangers of theologians uncritically using Marxist theses and methodologies.

I have always found it bleakly amusing that some Catholics on the Left have been attracted to an ideology which martyred so many Christians in the last century.  Here is the text of Libertatis Nuntius:

END_OF_DOCUMENT_TOKEN_TO_BE_REPLACED

Where Your CCHD Donations Go To

Today most of your parishes will be collecting for the Catholic Campaign for Human Development (CCHD).  Donald, Christopher, and I have written over and over again of where the money actually goes to, funding for abortions being the most grevious of the lot.

So think twice before donating anything.

This is from my personal blog – an exploration of what I think is the new secular religion. I took the gloves off for this one, and I’m sure more than a few people will take offense.

But if Larry David can pee on Jesus, I don’t mind returning the favor for the new religion.

There is a coalition of Catholic organizations that have formed that will be pushing for a nationwide boycott of the Catholic Campaign for Human Development (CCHD) called REFORM The Catholic Campaign For Human Development with a website.  The Sunday before Thanksgiving a collection is done by many parishes for CCHD.  Instead of donating money to an organization that is diametrically opposed to many teachings of the Catholic Church, submit the coupon that is at the top of this posting.

You can also download a PDF file and print it out yourself here.

The many scandals that the U.S. Conference of Catholic Bishops (USCCB) never ceases to amaze.  It’s been well documented how insidious and diabolical CCHD is from funding ACORN to funding abortions.

END_OF_DOCUMENT_TOKEN_TO_BE_REPLACED

Sometimes one image serves to sum up an event in the world’s memory.  For the Tiananmen Square protests of 1989, that image is probable the one of the “tank man” — a lone protester who was photographed on June 5th, 1989 when he briefly stood, unarmed, before a tank column and stopped it.

There is not agreement as to who the “tank man” was, and most reports suggest he was arrested by the secret police and executed within the next two weeks.

In those heady days, it seemed possible that within a few years communist dictatorship would be nothing more than a memory, but twenty years later the communist oligarchs in China have learned to accomodate freedom and enterprise enough to remain in power.  And the tank man’s dream remains unrealized.