Men Need to be Men

The King’s Men is an organization for Men to (re)discover what it means to be a man, a real man, a Catholic man as well as a manly Catholic.

As men we lead and protect the family.

We need to be active in the life of the Church.

We need to learn more about our Catholic faith and much, much more.

This has taken such a toll on our role as men, we have forgotten what it means to be a husband, father, and a leader in the Church.

Mark Houck and Damian Wargo of The King’s Men apostolate explain this and much more in a 35 minute segment of EWTN‘s Life on the Rock.

END_OF_DOCUMENT_TOKEN_TO_BE_REPLACED

When Masculine Virtues Go Out of Fashion 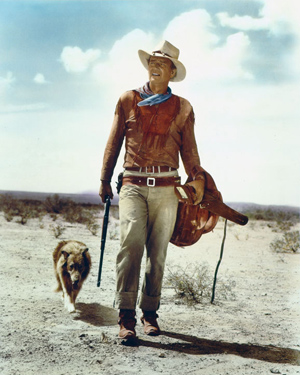 The following is a column written by Tom Hoffman of the American Thinker.

The culture war begun in the sixties has, in large part, been won by the left. Nowhere is this clearer than in the feminization of men. The virtues of manhood which had been extolled and celebrated throughout the middle ages right up to the 1950s have been completely expunged from academia and pop culture. The baby boom generation was the last to be taught the values of rugged individualism, risk-taking, courage, bravery, loyalty, and reverence for tradition. John Wayne epitomized the rugged individual who was committed to fighting “the bad guy,” but he was only one of a whole host of competing figures cut out of the same cloth. What happened?

Today, the Boy Scouts are fighting the last battle in a lost cause. Any man who stands up to the “women’s movement” is completely marginalized as a sexist and homophobe. These names have become just as stigmatizing as “racist” used to be. It is no wonder that women now are the majority of college graduates and are increasing their role in every institution from private enterprise to public service, including the military. Is this a healthy trend? The answer is clearly “no.”

Edward Gibbon chronicles the increasing femininity of the Roman Empire in his six-volume work, The Decline and Fall of the Roman Empire. He catalogues the progressive decadence that rendered the once-proud republic into spoils for barbarian hordes. The consuls in the early republic, who were warrior-generals adhering to a strict code of honor, gradually gave way to the backroom emperors who were no more than brazen criminals and thugs. It is the same script in all noble human enterprise: The fabric which bred success is torn apart by the complacency of the successful. When warfare is demonized as violence and negotiation is raised to an art, the end is near. Today, we are there.

END_OF_DOCUMENT_TOKEN_TO_BE_REPLACED

It’s ok for men to seek positions of authority, speak their mind, and help damsels in distress.  It’s in our DNA and that’s what God wants from us.

Here is a fine blog I recommend for those wanting to rediscover their masculinity and return on their path to manhood.  It’s called The Art of Manliness.

To view more commentary on Catholicism from RealCatholicTV click here.

To read more about the movie, Robin Hood Men in Tights, where the second video is taken from, click here.