END_OF_DOCUMENT_TOKEN_TO_BE_REPLACED

Jefferson Davis was always a friend to Catholics.  In his youth as a boy he studied at the Saint Thomas School at the Saint Rose Dominican Priory in Washington County Kentucky.  While there Davis, the only Protestant student, expressed a desire to convert.  One of the priests there advised the boy to wait until he was older and then decide. Davis never converted, but his early exposure to Catholicism left him with a life long respect for the Faith.

When the aptly named anti-Catholic movement the Know-Nothings arose in the 1840s and 1850s, Davis fought against it, as did his great future adversary Abraham Lincoln.

During the Civil War, Pope Pius wrote to the archbishops of New Orleans and New York, praying that peace would be restored to America.  Davis took this opportunity to write to the Pope’

END_OF_DOCUMENT_TOKEN_TO_BE_REPLACED

Jefferson Davis and the Crown of Thorns 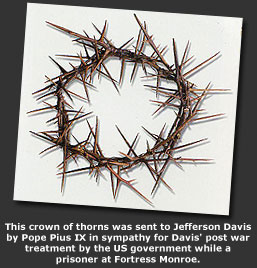 It has long been an article of faith of many admirers of Jefferson Davis that, while he was in Union captivity after the Civil War, he received a crown of thorns from Pope Pius IX woven by the hands of Pio Nono himself.  The Museum of the Confederacy in New Orleans has it on display.  It is a romantic story and appealing on an emotional level.  It is also false.  The Pope did send the imprisoned Davis his photograph with the text  from Matthew 11:28  ‘Venite ad me omnes qui laboratis, et ego reficiam vos, dicit Dominus.’ (Come to me all all ye who labor and are heavy burdened and I will give you rest, sayeth the Lord.)

END_OF_DOCUMENT_TOKEN_TO_BE_REPLACED

On Sin and Human Freedom

The cross-blog discussion that was initiated on the topic of “social sin” has now evolved into a debate over the origins and causes of sin. In response to my post on social sin, Nate Wildermuth at Vox Nova posted his own ideas about the relationship between society and sin, forthrightly admitting that he was going to “venture into heretical pastures” in doing so.

My intention here is not to beat up on Nate. He has expressed to me that he feels I may not be understanding his argument, though I do believe I have made the attempt in earnest. Rather than dissect in detail his argument once again, I am going to put forth here what I already placed in a com-box, but would like to open up to wider discussion – that is, my own view of sin and human freedom. Then Nate or anyone else may issue whatever challenges they like to any of my premises or conclusions, and perhaps we will have some clarity on the issue.

END_OF_DOCUMENT_TOKEN_TO_BE_REPLACED

Pio Nono, the Washington Monument and the Purloined Block of Marble

Well it took long enough.  George Washington had been dead for more than three decades before a society was founded to build a monument to his honor in the city which bore his name.  In 1832, the centenary of the birth of Washington, the Washington National Monument Society was founded.  The Society began raising funds and in 1836 announced a competition for the design of the monument.  The winning design by Robert Mills envisioned an obelisk arising from a circular colonnade.  The price tag was an astronomical, for the time, one million dollars.  Work on the obelisk finally began in 1848.  Nations around the world were invited to contribute blocks of marble for the monument.

On December 24, 1851, the American Charge d’ Affairs in Rome, Lewis Cass, Jr., wrote to the Society,  “I have the honor to inform you that I have been apprized by His Holiness the Pope. . . of his intention to contribute a block of marble toward the erection of the national monument to the memory of Washington. The block was taken from the ruins of the ancient Temple of Peace, adjoining the palace of the Caesars, and is to receive the inscription of ‘Rome to America.”  No doubt Pope Pius IX recalled that George Washington had ever been a friend to Catholics.

On October 20, 1853, the marble block from the Pope arrived in Washington. END_OF_DOCUMENT_TOKEN_TO_BE_REPLACED

Saint John Vianney is being staged as a one-man production titled “VIANNEY” and will be debuting in the Archdiocese of Galveston-Houston on August 4, 2009 AD.  This is in celebration of the 150th anniversary of the death of this patron saint of parish priests.  The play will continue in other dioceses across America.

Leonardo Defilippis plays the role of Saint John Vianney as he performs at various churches across the archdiocese.  Mr. Defilippis’s one-man stage production opens amidst the chaos of the French Revolution, a time which mirrors the secularization, materialism and anti-religious sentiment of today. Against this dramatic backdrop, a simple ignorant peasant priest enters the backwater town of Ars, a place where no one cares much about their faith, or sees the Church as particularly relevant. They don’t expect much out of John Vianney.