Irene Villar, self described abortion addict, details in her book Impossible Motherhood her 15 abortions in 16 years.  Read a story on the book here.  The story is a prize example of mainstream media treatment of abortion.  Obviously Villar has psychological problems according to the story, but the right to abortion is sacred and must be protected.

Irene Vilar worries that her self-described “abortion addiction” will be misunderstood, twisted by the pro-life movement to deny women the right to choose.

Of course Villar is merely the abortion rights movement taken to an extreme.  Children in the womb are completely disposable for any or no reason.  There is nothing wrong with a woman having 15 abortions except for the impact upon her.

A wonderful resource for women who have been through abortions is Project Rachel.

In Ramah is heard the sound of moaning,
of bitter weeping!
Rachel mourns her children,
she refuses to be consoled
because her children are no more.

Thus says the LORD:
Cease your cries of mourning,
wipe the tears from your eyes.
The sorrow you have shown shall have its reward…
There is hope for your future. 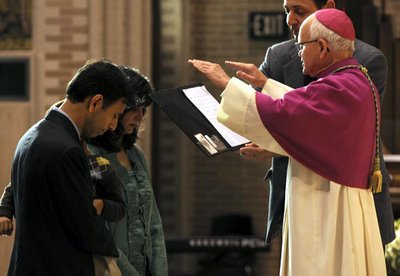 Hattip to Opinionated Catholic.  Abortion Recovery International, a group dedicated to helping women heal from the trauma of abortion has proclaimed April as Abortion Recovery Awareness Month.  Bobby Jindal, Governor of Louisiana, has issued a proclamation, as has Governor Rick Perry of Texas.  Bravo to the Governors!  Hey Jenkins, if Notre Dame really needs to honor a politician, you need look no farther than Catholic convert Bobby Jindal!

END_OF_DOCUMENT_TOKEN_TO_BE_REPLACED

I am not easily shocked after participating in the struggle against abortion since 1973, but this article did shock me.  Taking pride in the deaths of millions of innocents each year?    Jesus wept.  The fight against abortion is the preeminent moral struggle of our time, first to save the lives of the most innocent among us, but second because of the damage that legal abortion does to our moral sense.  If we take pride in abortion, is there any crime that we cannot, and will not, take pride in?