(Content advisory to the above video.  A few of the Rules of Acquisition are off-color.  You know what the Ferengi are like.)

We have been having a debate recently on The American Catholic between Austrians and Distributists.  As a devotee of free enterprise with as little government intervention as possible, I have found some wisdom in the Ferengi Rules of Acquisition as set forth in one of my favorite fictional realms:  Star Trek.  Many of the Rules of Acquisition of course are merely for entertainment purposes and would lead to immoral results, if not bankruptcy or prison, if attempted in reality.  However,  after a quarter century of running my own business, I believe these rules are insightful:

END_OF_DOCUMENT_TOKEN_TO_BE_REPLACED

Star Trek is For Kids

The film was made by a group of kids in 1978.  The sad and sorry fact is that I saw worse acting and production values in some episodes of the original Trek.

Comments Off on Star Trek is For Kids |

A Treatise on Anger, Jesus, and Mr. Spock

Some people like what I have to say. Some people don’t. One complaint I sometimes hear from the people who don’t is that I’m “angry.” So I want to publicly explore this dimension of my writing, on the blogs, in the comment boxes, and other venues. I want to answer the questions: am I really that angry? Is my anger, to the extent that it is really anger and not someone’s misinterpretation of my words, justifiable? Is it rational? Or is it entirely detached from reason and logic?

These questions themselves might leave you perplexed. Aren’t emotions and logic mutually exclusive? I think most people understand on some level that they aren’t, but we aren’t used to hearing why. Instead, typical debate rhetoric implies that if one is displaying an emotion, one has given up on logic. As is often the case with rhetoric, this claim is an absolute fallacy, it is the product of either unclear thinking or deliberate manipulation – a cheap lawyer tactic.

How many times, for instance, do you see in the television courtroom dramas the lawyer try to rattle the person on the witness stand to get them to display an emotion, and then use that emotion to discredit the facts the witness presents or the logic of the opposing counsel?

I co-blog with a lot of lawyers. For the most part, I like them, and I hope I don’t offend them when I say this. (Really guys!)

Comments may be left on my blog.

Comments Off on A Treatise on Anger, Jesus, and Mr. Spock |

Leonard Nimoy is calling it quits as to any future portrayals of Mr. Spock, and is retiring from show business.

Leonard Nimoy, the actor who has famously portrayed “Star Trek’s” original alien Spock for over 40 years, has announced he’s officially hanging up the pointy Vulcan ears for good. Nimoy, 79, plans to retire shortly from show business and the “Star Trek” convention circuit, according to the Canadian newspaper Toronto Sun.

END_OF_DOCUMENT_TOKEN_TO_BE_REPLACED 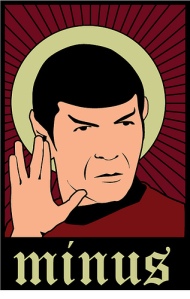 Go here for an absolutely hilarious take on Spock as a Catholic at Acts of the Apostacy.  Hmmm, actually in Star Trek VI it was revealed that Spock had a painting of the expulsion from the Garden in his quarters.  Perhaps there is an opening there for conversion?  Spock as Jesuit?  I like it!

Hattip to Ace of Spades.  I have to refresh my credentials as Chief Geek on this blog and so I post this blooper compilation video from the original Star Trek series.  Much to my disappointment they did not include some of Shatner’s more histrionic Captain Kirk speeches, but what they chose isn’t bad.

“As the right of each sentient species to live in accordance with its normal cultural evolution is considered sacred, no Starfleet personnel may interfere with the normal and healthy development of alien life and culture. Such interference includes introducing superior knowledge, strength, or technology to a world whose society is incapable of handling such advantages wisely. Starfleet personnel may not violate this Prime Directive, even to save their lives and/or their ship, unless they are acting to right an earlier violation or an accidental contamination of said culture. This directive takes precedence over any and all other considerations, and carries with it the highest moral obligation.”

Yesterday Darwin had a thought provoking post about the impact of technologically advanced cultures on less developed cultures.  In the combox discussion there were frequent references to the Prime Directive of Star Trek.  This of course gives me an excellent excuse for posting this examination of the Prime Directive and for me to burnish my credentials as the “Geekier-Than-Thou” member of this blog. END_OF_DOCUMENT_TOKEN_TO_BE_REPLACED

Shatner the Canadian explains the preamble of the Constitution to us!  Regular readers of this blog will not be surprised to see me drag Star Trek into my posts leading up to the Fourth of July!

END_OF_DOCUMENT_TOKEN_TO_BE_REPLACED

If Obama Is Spock We Are Doomed!!!

Maureen Dowd wrote a column last month in which she compared, tongue in cheek, Obama to Mr. Spock from Star Trek.  Jeff Greenwald of Salon also sees a resemblance between Chicago’s “gift” to the country and the first officer of the Enterprise.  Bill Whittle of Pajamas Media, takes great joy in informing us in a very entertaining video here why having an intellectual in the mode of Mr. Spock as president is very bad for the nation.

END_OF_DOCUMENT_TOKEN_TO_BE_REPLACED

You knew I’d find some way to post about Star Trek again didn’t you?

Comments Off on Faith Trek |

No, We Aren’t Changing The Name Of The Blog To The American Star Trek

END_OF_DOCUMENT_TOKEN_TO_BE_REPLACED

Saw the Star Trek movie with the family on Saturday.  It was exciting, full of good humor, fast paced, with magnificent and imaginative cgi shots.  The acting was competent.  Karl Urban gives an eerily on target portrayal of McCoy and somewhere Jackson DeForest Kelley should be smiling.  Anyone who enjoys a good action movie should rush out to see it.  The actors and actresses involved in this film have grabbed the golden ring and will probably be able to go on making these films until they are as old as the surviving actors and actresses of Classic Trek are today.  The film was largely family friendly.  Some relatively minor swearing, one reference to Kirk having carnal relations with animals, said as a put down by Uhura to Kirk during an unsuccessful pick up attempt by him, and a scene of Kirk in a bed with a female cadet, an Orion non-slave girl, with both of them in their undies, which is played strictly for laughs and is not salacious.   So, all in all, we felt that we got a good return on our entertainment dollars.   Only one small problem.  It isn’t Star Trek.

END_OF_DOCUMENT_TOKEN_TO_BE_REPLACED

From the only reliable news source on the internet, the Onion.  The new Star Trek movie opens today.  We will quickly learn if there will be a divergence of reaction between the hard-core “yes-this-Star-Trek-uniform-is-what-I’m-wearing-for-jury-duty” and the rest of us Terrans.  I hope the acting is several notches above what can be seen for free on the net in the  Star Trek Phase II episodes.

END_OF_DOCUMENT_TOKEN_TO_BE_REPLACED

The new Star Trek movie is being released on May 8, 2009.  Here is the official site.