TAC Down Until Sunday Evening, November 14

The American Catholic is going through an upgrade this next week in order to better serve our readers and engage the world.

This means we will be down for roughly a 24 hour period and will return tomorrow evening, November 14 around 6pm Central time.

Thank you for your patience!

Comments Off on TAC Down Until Sunday Evening, November 14 |

Posted by The TAC Editors

I’ve heard it said that imitation is a form of flattery, but I think it is equally true that uncharitable and unfunny satire is flattery in its own right. The American Catholic (as well as a couple of other blogs associated with frequent com-boxers here)  has now been parodied/attacked with a faux-blog called “The Catholic Fascist.” I think we all know who is behind this rather bizarre and childish waste of time.

END_OF_DOCUMENT_TOKEN_TO_BE_REPLACED

This will be short and bitter-sweet (yes, 500 words is short for me).

Evidently we at TAC have had the dubious honor of being recognized by the National Catholic Reporter, or one of its contributors at any rate, as “a little kookie.” That’s alright by me, since I’d rather be greatly kooky [is it kooky or kookie?] than to be even a little boring or unimaginative.

What is smugly dismissed as “kookiness” in this case, however, is the diversity of opinion we have here, as opposed to perhaps the rigid ideological uniformity of some other websites and blogs that I won’t name.

I’m not interested in defending or rejecting the positions that were criticized in the NCR, but I would like to defend the ideological diversity we have sought to foster here. We have our Reagan conservatives, our rather moderate conservatives, and a few left-of-centers. And there’s our resident Distributiarian (a rather disparaging term someone coined for my distributist-libertarian ideology that I choose to wear as a badge of honor).

END_OF_DOCUMENT_TOKEN_TO_BE_REPLACED

Here are this past weeks Top-10 most visited Catholic posts from The American Catholic for June 20-26:

2. McChrystal Should Be Fired by Donald R. McClarey

6. Real Sex vs. the Contraceptive Mentality (Part 2) by Darwin

8. Planned Parenthood, What Happened to the Money? by D.R.M.

9. Under the Roman Sky by Donald R. McClarey

I wasn’t going to do this, but now I am. A contributor (Morning’s Minion) to a certain blog (Vox Nova),  whose views on gun control I previously challenged, took it upon himself to let it all out about “conservatism” – partially, I believe, in response to our exchange.  The same themes are there at least, though he does go on (and on) about slavish right-wing support for Israel, an issue on which I am not so enthusiastic. I’ve also made my opposition to America’s interventionist foreign policy known.  In doing so I respectfully digress from many of my co-bloggers at The American Catholic.

But there are a number of very broad points made by Morning Minions that are more or less directed at me, and my co-bloggers, and of course conservatives and libertarians in general, and I will answer them here.

END_OF_DOCUMENT_TOKEN_TO_BE_REPLACED

My latest article for Inside Catholic is a condensed version of a number of posts I wrote here at TAC  regarding Catholicism and American history.

I mention my membership in TAC as part of the reason why I came to change my views on America’s past; Don, Paul Z. and others have made a number of enlightening historical posts/comments over the months that prompted me to investigate further.

Here’s hoping that my plug gets us a few more readers, and that IC and TAC continue to keep one another in mind.

On that same day, Jack Smith of The Catholic Key Blog debunked the story with yeoman’s work finding the source of the “alleged” Vatican Halloween Warning to a priest of the Spanish Bishop’s Conference by the name of Fr. Joan Maria Canals, CMF, a liturgy expert.  I followed up with a posting on this website early the next day supplementing Jack Smith’s findings with common mistakes made in reporting what is and isn’t official. 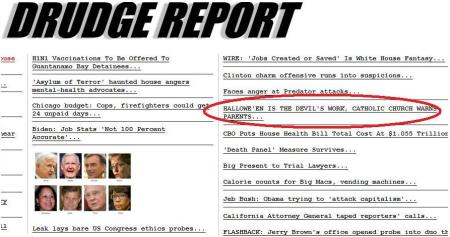 The Drudge Report removed the link to the Daily Mail late Saturday morning.  Then early Monday afternoon on November 2, Doug Stanglin, who wrote the piece that inaccurately attributed the Vatican warning parents of the anti-Christian nature of Halloween, followed up with our side of the story.

END_OF_DOCUMENT_TOKEN_TO_BE_REPLACED

So here are the Top-10 most visited articles these past 12 months:

END_OF_DOCUMENT_TOKEN_TO_BE_REPLACED

Year In Review Of The American Catholic

We here at the American Catholic are celebrating our one year anniversary by reflecting on our favorite posts of the last 12 months.

Today it is my turn to contribute my favorite postings.

What Is An American Catholic – Zach

The Scary Thing Is: We Really Mean It – DarwinCatholic

Moloch: A Call for a More Sensitive Reappraisal – David Curp

END_OF_DOCUMENT_TOKEN_TO_BE_REPLACED

As Donald noted yesterday, it’s been a year since we started here at The American Catholic. I know we’ve all been pleased both at the quality of the writing from the team as a whole, and also from the interest from our readers.

Looking back over the last year, we put together a list of some of the our favorite posts.

A Can of Worms: In Praise of the Latin Mass Joe Hargrave

Are Pro-Lifers Stuck with the Republican Party? John Henry

Nationalism and the Problems of the Middle East DarwinCatholic

Send Me Your Poor DarwinCatholic

Should Catholics Own Guns? Ryan Harkins

The Poor You Will Always Have With You Ryan Harkins

Uncomfortable Thoughts on the Declaration Blackadder

Were the Apostles Socialists? Blackadder

I find it hard to believe, but The American Catholic is celebrating its one year birthday today.  I’ve enjoyed writing for the blog over the past year immensely, and I hope our readers and commenters have also had some fun.  Contributors  will be linking to some of their favorite posts.  Here are two of mine:

1.  report-to-the-emperor-first-draft-I posted this on Good Friday and I think I will make this a blog tradition of doing so each year.

2.  triumph-of-the-king-This I posted on Palm Sunday.

My friend and colleague Christopher Blosser is having some computer trouble.  Two of his posts that I greatly admire are:

In regard to Chris this list would be quite lengthy if I included all the posts he has written which I wish I had written!  Writer envy, it is a terrible thing!

I am sure the next year will be as crowded with events as the last one was.  The American Catholic will be here to comment on the passing scene,  as Americans and Catholics, with, I trust, a leavening of humor and at least a dash of common sense.

The Personality Type of a Blog

Per Typealyzer, The American Catholic blog has the personality type of an INTP according to the Myer’s Briggs indicator. Here is the description: