A Map Of How Americans View Europe 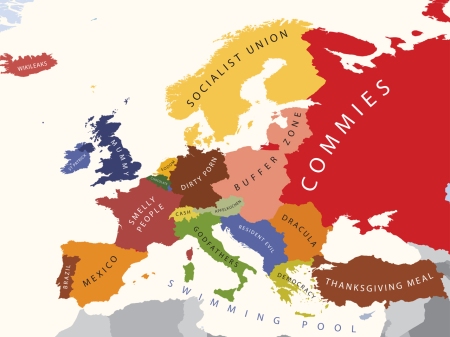 This is a somewhat humorous map of how Americans view Europe.

A Geography of Prejudice is one way of calling what Yanko Tsvetkov created.

END_OF_DOCUMENT_TOKEN_TO_BE_REPLACED

The text of Benedict’s keynote speech on his trip to the UK is here; video of the speech can be found here.

Obviously, you read or watch the speech in its entirety, but I will present a few highlights for readers:

And yet the fundamental questions at stake in Thomas More’s trial continue to present themselves in ever-changing terms as new social conditions emerge. Each generation, as it seeks to advance the common good, must ask anew: what are the requirements that governments may reasonably impose upon citizens, and how far do they extend? By appeal to what authority can moral dilemmas be resolved? These questions take us directly to the ethical foundations of civil discourse. If the moral principles underpinning the democratic process are themselves determined by nothing more solid than social consensus, then the fragility of the process becomes all too evident – herein lies the real challenge for democracy.

END_OF_DOCUMENT_TOKEN_TO_BE_REPLACED

My second favorite living historian, Michael Burleigh, who has written stunningly original works on subjects as diverse as Nazi Germany, religion and politics in the last two centuries,  terrorism, and morality and World War II,  has taken up the cudgels against the despicable attitude of many Brits of the chattering classes regarding the visit of the Pope to the Island next to Ireland.

Under normal circumstances, one might say “welcome” rather than “receive”. But the multiple sexual scandals that have afflicted parts of the Catholic Church have created a window of opportunity for sundry chasers of limelight – including human rights militants, crusading gays, Islamist fanatics, and celebrity God-botherers – to band together to “arrest” the Pope under laws so obscure that few knew they existed. Because child abuse is involved, rather than the more widespread phenomenon of homosexual predation on young men, these manifestations will receive much media attention, especially from the BBC, to the guaranteed perplexity of a less involved general public in a nominally Protestant country. It will require some effort of mind to tune out this noise to hear what the Pope will be saying.

END_OF_DOCUMENT_TOKEN_TO_BE_REPLACED

The actor has been hired by the Catholic Church to play the leader of Scotland’s Protestant Reformation in a pageant of the country’s historical figures. …

Knox’s surprise inclusion by Catholic Church leaders follows accusations that this year’s 450th anniversary of the Reformation is being ignored by the Scottish Government.

The Reformation of 1560 revoked the Pope’s authority in Scotland and banned Catholic Mass. …

A Church of Scotland spokesman said: “It is a sign of a healthy nation that diversity within the Christian community is something to be celebrated as opposed to a source of division and struggle.

“It is a gift to those of us of a Protestant persuasion that by including this figure, the Catholic Church is contributing to the celebrations of the Reformation.”

(Regular roundups of news relating to Pope Benedict’s September visit to the UK may be found here).

Hattip to Allahpundit at Hot Air.  One in five British adults were unable to identify a picture of Winston Churchill in a recent survey.

As part of the survey, carried out to mark this week’s 70th anniversary of Churchill’s prime ministerial tenure, more than 1,136 people were asked to identify three prominent 20th century PMs including Churchill, Margaret Thatcher and Tony Blair.

Following the pattern, researchers projected the rough date when the leaders would no longer be recognised, with Churchill’s demise predicted in 80 years’ time…

Kevin Clancy, head of Historical Services at the Royal Mint, added: “It’s shocking that one of our greatest statesmen runs the risk of potentially being forgotten.

END_OF_DOCUMENT_TOKEN_TO_BE_REPLACED

To have the LA Times refuse to endorse Boxer is a strong indication of just how weak she is this election year.  She is probably strong enough to defeat Kaus (sorry Mickey!) in the primary, but there is blood in the water for the general election. END_OF_DOCUMENT_TOKEN_TO_BE_REPLACED

British Survey on Foreigners In the United Kingdom

I love the dry humour of the English!

The Liberal Dystopia of Political Correctness

In our world today we are living in what I would refer to as the Liberal Dystopia of Political Correctness.  This thing that our current Holy Father warned us about.

As secular humanism continues its march towards a Dictatorship of Relativism we innocent bystanders suffer the consequences of its fruits when prejudice is rewarded and common sense rejected.

Five years ago this month, in the Mass prior to the Conclave of 2005 A.D., then Joseph Cardinal Ratzinger warned us in his homily that:

“We are building a dictatorship of relativism that does not recognize anything as definitive and whose ultimate goal consists solely of one’s own ego and desires.”

An excellent example of this dictatorship of relativism or as I would name it, liberal dystopia, is the United Kingdom’s Foreign Office anti-Catholic memo on the preparation of Pope Benedict’s visit to Britain.

In this event Anjoum Noorani, another Oxford educated civil servant* of the U.K. Foreign Office, who headed the Papal Visit Team that was planning the Pope’s visit to Britain was only verbally reprimanded for his part in approving and distributing the anti-Catholic memo.

What makes this worse is that the Foreign Office advertised the requirements for the position to lead the Papal Visit Team as “Prior knowledge of the Catholic church is not necessary“.

To add some irony the advertisement also stated, “High levels of tact and diplomacy will be required.”