As my original post and follow-up post explained, until a year ago I didn’t have hardly any real understanding of the monetary (and banking) system. You might find it helpful to listen to the this talk given by G. Edward Griffin. It caused a paradigm shift to occur with how I understood these matters and how I now invest. It may be one of the most important hours you ever spend studying a secular topic. You can listen to it straight off Google videos. Make the time to listen to it.

After listening to his talk watch the following helpful video on the Federal Reserve. For some unknown reason the video doesn’t automatically begin so give it a tiny nudge forward and it will begin playing.

Read the following books on the topic.

The Creature from Jekyll Island: A Second Look at the Federal Reserve

The Case Against the Fed

Educate yourself. After all it’s October. It’s ok to be shocked and scared straight!

In light of Zach’s stellar posting which generated over 240 comments ranging from anarchism to Oscar Romero and which inspired a posting by Michael Denton.  These comments, although informative to a certain extent, may have detracted from the original intent of the posting.  Henceforth in regards to said activities being done on Zach’s posting concerning Representative Chris Smith, I am starting a new tradition here at American Catholic, the open thread.

So feel free to comment to your hearts delight that isn’t related to any other postings on this website.

The comments policy is still in place so don’t forget to treat each other as brothers and sisters in Christ. 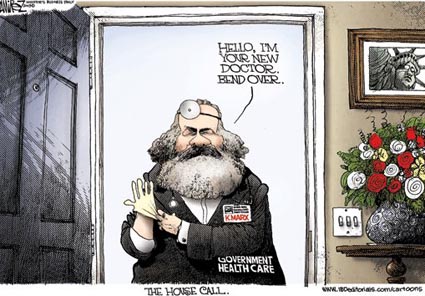 A Thin Line We Must Walk

Some recent discussions have reinforced my natural disdain for many features of what is derisively called “The Nanny State”. The underlying philosophy of the nanny state, and of the modern liberals that run it, is that the people must be protected from themselves. Instead of viewing individuals as potentially responsible citizens, they seek to deprive them of their dignity as free and moral beings by imposing restrictions on personal behavior.

But there is such a thing as reasonable regulation for the common good. Catholic social teaching has never been libertarian at its core. It has condemned economic liberalism, the doctrine of the “invisible hand” – that the private pursuit of self-interest on the part of each leads necessarily to benefits and prosperity for all. Unlike the atheist Objectivists, we do not believe that selfishness and consumerism are virtues.

We are therefore, as Catholics and citizens, called upon to find a balance between respect for individual liberty and the common good. I am deeply dissatisfied with both lassiez-faire approaches to social problems (including and especially economic problems) and statist paternalism, because in a way they are two different versions of a bad parent.

END_OF_DOCUMENT_TOKEN_TO_BE_REPLACED

Many on the political left wish to emulate the social welfare state model of most of western Europe.

END_OF_DOCUMENT_TOKEN_TO_BE_REPLACED

Is Obama a Socialist? You be the Judge.

“If you look at the victories and failures of the civil rights movement and its litigation strategy in the court. I think where it succeeded was to invest formal rights in previously dispossessed people, so that now I would have the right to vote. I would now be able to sit at the lunch counter and order as long as I could pay for it I’d be o.k. But, the Supreme Court never ventured into the issues of redistribution of wealth, and of more basic issues such as political and economic justice in society.